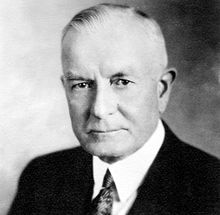 Thomas John Watson, Sr. (born February 17, 1874 in Campbell , New York , † June 19, 1956 in New York City ) was an American entrepreneur and until 1956 CEO of IBM . He was one of the richest men of his time and was called the world's best salesman on his death. The organizational methods introduced at IBM under his leadership influenced generations of managers.

Thomas John Watson came from a very religious family of Scottish emigrants who entered the United States in the 1840s. His father Thomas Watson was in the wood business, his mother Jane Fulton White (related to Robert Fulton ) was a teacher. Thomas J. Watson had four sisters: Effie, Jennie, Emma and Louella.

Watson's professional training consisted of a single bookkeeping course at the Miller School of Commerce, a business school he graduated from in May 1892. He started his career at the age of 18 as an accountant at Clarence Risley's Market in Painted Post, New York. He later sold sewing machines and musical instruments (mostly organs and pianos) on a commission basis for a local grocer named Bronson before becoming commission agent for the National Cash Register Company (NCR) in Buffalo in October 1895 . There he achieved such good sales rates that in 1899 he was assigned to Rochester as a sales representative, where he and his entire family moved into a house. In just a few months, he put the NCR's worst sales district in the top ten of the internal ranking. He remained in this position until October 1903, when NCR founder John Henry Patterson selected him for higher tasks: Equipped with a million dollars, he was supposed to build a pseudo-competitor of NCR who, by trading in used cash registers, made life difficult for all other used dealers should do. He fulfilled this task so successfully by 1907 that his company was able to conquer a large part of the second-hand market. In 1908 he became a member of the board of directors of the NCR and the company's second most powerful man after Patterson. Motivate decided that discouraged employees of the sales force, he designed for a lecture the motto THINK ( think! ), Which later became a well-known symbol of IBM.

In 1913, Watson was convicted of illegal anti-competitive sales practices. He is said to have caused his people to sell defective cash registers (either used NCR registers or those from the competition). These registers soon failed - and an NCR agent showed up to sell a brand new register. He was sentenced to one year in prison, along with Patterson, who still owns NCR. The condemnation was unpopular among the public because Patterson and Watson the victims of the flood of Dayton ( Ohio had helped) in the year 1913th Attempts to obtain a pardon from President Woodrow Wilson were unsuccessful. In 1915, an appeals court overturned the verdict on the grounds that key defense evidence had not been admitted - by that point, Watson had long since left the NCR. In 1913 he was fired from Patterson.

On April 17, 1913, Watson married Jeanette M. Kittredge. The couple had two sons and two daughters. Both sons followed him into the company and took up leading positions at IBM. The younger son, Arthur K. Watson, became president of the IBM World Trade Corporation. 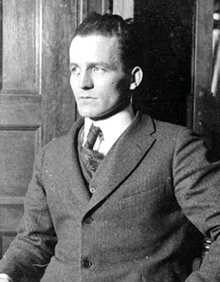 On May 1, 1914, Watson became the first general representative of the Computing-Tabulating-Recording Company , which had only been in existence for three years, and in 1915 he also became its president. On his salary, he negotiated a commission of five percent of profits after taxes and dividends, which later made him the highest-paid manager in the United States (at the time of the Great Depression, he was making $ 1,000 a day). When he took the job, the company had fewer than 400 employees. Now president of the CTR, Watson renamed the company International Business Machines Corporation in 1924 . Watson made IBM a quasi-monopoly of punched card technology by systematically eliminating the competition and by patented further developments and improvements to the Hollerith machines . This prompted the US government to initiate the first anti-trust proceedings as early as 1932 to try to eliminate IBM's monopoly in the manufacture and sale of punched cards . Another procedure followed in 1952. At the time, IBM owned 90 percent of all tabulating machines in the United States, which were only rented but not sold.

Watson saw it as an important part of his job to motivate the sales force. As part of this, he had his salespeople come together regularly for joint singing events (see the IBM songbook under web links).

All his life, Watson had a keen interest in international relations. He adopted the slogan “World Peace through World Trade” for IBM , worked closely with the World Chamber of Commerce and was elected President in 1937. For many years he served as a trustee for Columbia University and Lafayette College . He received 27 honorary doctorates from US universities and four more from other countries.

His international and political activities were primarily aimed at maximum profit. He supported Franklin D. Roosevelt in 1932 with generous donations in the election campaign and maintained close contact with him. But he also expressed his greatest appreciation and sympathy for Adolf Hitler . In 1937, Watson received the German Star Eagle for his refusal to join the boycott against Germany and his willingness to host the World Trade Summit in Germany. After the outbreak of World War II , Watson returned the medal in June 1940. Through the German subsidiary Dehomag , IBM did profitable business with the later war opponent of the USA during the Third Reich . What Watson, who was always very well informed about his company and handled many small things personally , knew about the use of the rented punched card sorting machines, especially when organizing the Holocaust , has not yet been clearly clarified.

In September 1949, Watson was named chairman of IBM . One month before his death, he handed over management of the company to his son Thomas . At the time of his death, Watson was living in Manhattan. He was buried in Sleepy Hollow Cemetery in New York. The Watson Escarpment in Antarctica is named after him. The IBM research center is named after him and his son Thomas J. Watson Research Center .

The following quote is often attributed to Watson: "I believe there will be a need in the world for perhaps five computers." He is said to have said this sentence in 1943, but there is no evidence for it. Also without receipt, the Spiegel of May 26, 1965 read: “IBM boss Thomas Watson had initially wanted nothing to do with the new devices. When in the early 1950s the first arithmetic monsters for commercial use appeared, which filled entire suites with their thousands of tubes and developed unbearable heat, Watson estimated the needs of the US economy at a maximum of five. "