Herman Hollerith (* 29. February 1860 in Buffalo , New York ; † 17th November 1929 in Washington, DC ) was a US -American entrepreneur and engineer . He was the inventor of the Hollerith punch card method named after him in data processing .

Hollerith was born as a child of German immigrants in Buffalo , New York State. His parents came from Großfischlingen (near Landau / Pfalz ); after the Palatinate uprising they emigrated to the USA with their two daughters. Father Johann Georg Hollerith (* September 18, 1808 in Großfischlingen) had taught ancient languages ​​at the Speyer grammar school until 1848.

Herman attended New York City College . He graduated from Columbia University with a degree in engineering in 1879 as a mining engineer . He then worked as a special agent in the American census of 1880, for which he prepared a statistical report on the type and regional distribution of energy sources in heavy industry . In 1882 he taught at the Massachusetts Institute of Technology ; In 1883 he moved to the US patent office .

In 1884 he worked as a freelancer and on September 23 of this year submitted his first invention for data storage, which after a few revisions led to the punched card patents 395781 and 395782 from 1889. In doing so, he drew on the design ideas of the French mechanic Falcon, who controlled his loom using a wooden board with combinations of holes, and the further development of this process through jacquard , which replaced the wooden board with punch cards made from cardboard templates. Hollerith used the original method of controlling machines by means of perforated cards to solve / evaluate organizational problems. A trick used by the railway conductors at the time gave him the idea of ​​using punched cards for mass data collection: They punched the tickets at certain points in order to record certain characteristics of a passenger, such as gender and skin color. This made it more difficult for different people to use the ticket multiple times. He developed a system for recording data on punched cards. This consisted of the tabulating machine , the punch card sorter , the punch card punch and the punch card reader . On December 9, 1888, he installed the invention in the US Department of War . Their first use was to simplify the mass recording of medical data - not the calculation of the US census, as is often rumored. On January 8, 1889, he applied for a patent for his system. 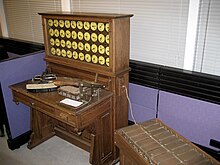 He originally developed the system (also known as the Hollerith machine) in the late 1880s, together with the doctor John Shaw Billings, for the statistical recording of cases of illness in the population in order to determine their state of defense. Hollerith subsequently succeeded in convincing the census bureau to use his machine in the 1890 American census . It helped to speed up the count enormously. In just two years with 43 machines and 500 employees as operating personnel, the evaluation of the data was successful; previously, the same number of employees would have taken a full seven years. Hollerith didn't sell his machines, he rented them to the census office. His first major contract outside the United States came from Russia , where a census was first conducted.

After further improvements to the system, he finally founded the Tabulating Machine Company in 1896 in order to exploit his invention commercially. However, in 1905, because of excessive prices, he lost his best customer, the US Census Bureau , which still carries out censuses every ten years. He sued the Census Bureau in 1910 for alleged patent infringement and tried to prevent the upcoming census - both in vain. 1911 sold Hollerith eventually his company for around million 1.21 dollars and a ten-year ongoing consultancy contract, which was worth 20,000 dollars annually.

The German licensee from 1910 was the German Hollerith machine company DEHOMAG in Berlin.

The Hollerith constant in the FORTRAN programming language was named after Herman Hollerith.