Tunxdorf is a village on the Ems and a district of the city of Papenburg in the Emsland district in Lower Saxony .

Tunxdorf is located in the northwest of the city of Papenburg , north of the Aschendorf district and west of the Nenndorf district . The nature reserve around the old Emsarm is called “ Tunxdorfer Loop ”. 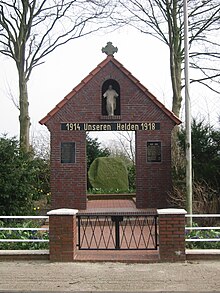 The village of Tunxdorf was first mentioned in the 8th century (as Tunglasthorpe ). It is assumed that Tunxdorf is the place of origin of the von Thungestorp family, of which a Thiedbold from Thungestorp is documented around 1150 . In the 15th century at the latest, however, the aristocratic seat seems to have been given up.

On January 1, 1973 Tunxdorf was incorporated into the city of Papenburg.

Tunxdorf can be reached by car via the A 31 , Rhede / Ems exit, or federal road 70 (from the direction of Aschendorf) or by train from Papenburg or Aschendorf stations.

The Tunxdorfer Waldsee was created as a quarry pond through the construction of a modern dike to protect against the Ems. Originally, the highest point (16 m above sea level) of the so-called Tunxdorf Mountains was located at the site of today's Waldsee. Today it serves as a swimming lake with its sandy beach and is a destination of regional importance. As a result of the construction of the Autobahn 31, more quarry ponds were created in the region, so that today there are more bathing facilities in the vicinity and thus significantly fewer visitors to the Tunxdorfer Waldsee are recorded than in earlier times. There is a campsite near the forest lake .

The local sports club is SV Tunxdorf-Nenndorf, which offers several sports, but above all football.

Every year on Ascension a place in Tunxdorf / Nenndorf Marksmen of the shooting club Tunxdorf / Nenndorf instead. Moreover, there is a year - usually on the first weekend in September - a penny fair , which takes place in the square of Tunxdorf-Nenndorfer village community house.

Between Tunxdorf and Aschendorf lies the cemetery of the Jewish community Papenburg-Aschendorf with more than 69 preserved tombstones, mostly inscribed in Hebrew.

Districts of the city of Papenburg