Accident at BASF in Ludwigshafen in 2016 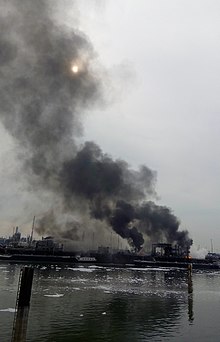 On October 17, 2016, there was a serious accident at BASF in Ludwigshafen , Rhineland-Palatinate , with a fire that lasted more than ten hours and two explosions. As a result, five people died and 28 others were injured, six of them seriously. According to BASF, it was the sixth reportable accident in 2016.

The Ludwigshafen plant is the main location of BASF. Here the company operates a number of chemical plants that are linked to one another. The steam cracker , in which naphtha is split into many basic substances used in the chemical industry, is fundamental to production . In the country's northern harbor in the northern part of the site all flammable liquids and used in the factory liquefied gases are handled, a total of approximately 2.6 million tons per year. According to BASF, the port is of great importance for the company's raw material supply. The transshipment points that have been expanded so far are equipped with permanently installed foam fire extinguishing systems. However, these foam cannons do not reach the rear pipe systems between the piers and the railway lines.

The facilities in the port are operated by various companies. The pipelines on which the accident occurred are not operated by BASF.

Site of the accident on October 17th, around 1 p.m.

Fire service on October 17th at around 7 p.m.

On October 17, 2016 around 11: 20–11: 30 a.m., while work was being carried out on a pipeline route, a fire and an explosion broke out in the northern state port. The cause is assumed to be a cut in a product line with an angle grinder . Extinguishing trains from the BASF plant fire brigade moved out. According to the company, a supply line in the tank farm was on fire. As a result, according to BASF, pipelines with ethylene and propylene or liquid gas burned . There was a second, violent explosion. Rescue workers from Ludwigshafen put out the main fire and several secondary fires. The extreme heat development caused vehicles to catch fire. The fire brigade laid a foam carpet over the pipe trench in which the pipelines are located.

A tanker loaded with ethylhexanol was lying on the pier at the time of the explosion and was about to be unloaded. Launched by the firefighter home occupied fireboat metropolitan area could cool the ship and prevent the spread of the fires on the ship.

The professional fire brigade set up a crisis team. In Ludwigshafen was disaster declared and 133 people were evacuated from the danger zone. Forces from all over the region were deployed: 100 men from the professional fire brigade and the voluntary fire brigade Ludwigshafen as well as 62 men from the plant fire brigade. The Mannheim fire brigade was also on duty with the fire boat, several measuring vehicles and a fire truck to manned the BASF watch. According to BASF, the fire was brought under control by the fire services in the late evening of October 17, 2016. However, the controlled fire continued at midnight and was not reported as having been extinguished until early Tuesday morning. Between the country's port north and the Rhine have been chemical barriers erected to prevent leaked chemicals get into the river.

According to conflicting media reports, the company shut down 20 or 24 of 200 plants, including both steam crackers whose raw material supplies had been interrupted by the accident. As a result, combustibles had to be temporarily flared . From October 20, the steam crackers and other systems were restarted. The course of the accident led to the shutdown of plants and is therefore regarded as an operational disruption .

In the accident, a total of four members of the BASF fire brigade died , including the operations manager and a sailor from a tanker. 30 people were injured, eight seriously. Two fire brigade victims died in action, one seriously injured firefighter died in hospital on October 29, 2016, and another - after struggling to survive in hospital for 11 months - in September 2017.

A column of smoke rose and drifted north-northeast, i.e. in the direction of Mannheim and Bergstrasse . Residents in Ludwigshafen and in the Mannheim districts of Sandhofen , Scharhof and Kirschgartshausen were asked to keep windows and doors closed. BASF announced that the leaked substances did not pose a health risk. The “pollutant cloud” that was driven north-northeast was largely washed out in the afternoon during heavy rainfall.

Also on October 18, several measuring vehicles from BASF, the Ludwigshafen fire brigade and the Mannheim fire brigade were in action in the region to detect any hazardous substances in the air. The measurements did not show any increased values. On the evening of October 18, the city of Ludwigshafen announced that “a possible endangerment to the population can now be virtually ruled out” and lifted the warning notices, except for an industrial park directly adjacent to the northern port.

On the day of the accident, the environmental protection organization Greenpeace took water samples above and below the accident site and examined them for substances that could be released in the event of an explosion or that result from a chemical burn and which could end up in the Rhine with the extinguishing water . The analysis did not reveal any increased levels of pollutants.

In mid-November, one plant was still shut down and 40 plants were only operated under partial load .

The event was noted worldwide. General Director Marco Mensink from CEFIC commented in Chemical & Engineering News that accidents of this kind cannot generally be ruled out. The Engineer described the accident as the worst incident in the chemical industry in Germany for twenty years. As a result of the production restrictions at BASF, effects on the world market prices of specialty chemicals have been observed.

The parliamentary groups of the governing coalition (SPD, FDP and Greens) requested a special session of the Rhineland-Palatinate state parliament on the accident. On October 27, there was a special meeting of three committees in the Rhineland-Palatinate state parliament in Mainz. A member of the plant safety commission criticized the accident management by BASF and the city of Ludwigshafen am Rhein. The Lord Mayor of Ludwigshafen Eva Lohse broke off her trip to Ecuador, where she was at a UN conference as President of the German Association of Cities . Lohse announced a special meeting of the city council and extensive investigations into the causes of the accident.

The Frankenthal public prosecutor's office investigated the cause after the accident in Ludwigshafen. She investigated, among other things, on suspicion of negligent homicide.

On February 5, 2019, the trial of the 63-year-old worker from a subcontractor who was accused of cutting a wrong pipe began at the regional court in Frankenthal, Palatinate. The public prosecutor's office pleaded for negligent homicide as well as bodily harm and the negligent causing of an explosive explosion. Several co-plaintiffs were particularly interested in clearing up what had happened.

After 28 days of hearing, during which 28 witnesses and nine experts were heard, the court announced the verdict on August 27, 2019: The prosecutor's request followed and imposed a one-year suspended prison sentence. The judges took into account the severe psychological suffering of the worker as a result of his mistake, he was also unable to work and 70 percent disabled by the consequences of the accident. A “causal co-responsibility” of BASF recognized by the court also had a mitigating effect. Already after a wrong cut in 2011, as well as from the experience of a large-scale exercise in 2015, it could have been recognized by the judges that the safety precautions were in need of improvement.

On September 5, 2019, it was announced that two parties involved wanted to appeal. While the lawyer of the parents of one of the dead had demanded a harsh sentence, the defendant's defense lawyer wanted to obtain an acquittal or a suspended sentence of no more than six months.

Commons : Accident at BASF in Ludwigshafen 2016  - collection of pictures, videos and audio files