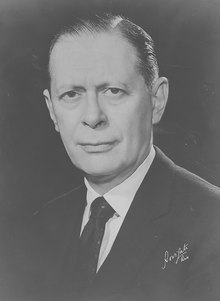 Start of diplomatic career and acting Minister of Justice

Vasco Tristão Leitão da Cunha was a son of the lawyer and publicist José Maria Leitão da Cunha and his wife Agnes Reidy Leitão da Cunha and the nephew of Raul Leitão da Cunha , who was Minister of Education and Health between 1945 and 1946. After attending school, he began to study law and social sciences at the law faculty of the Universidade Federal do Rio de Janeiro , which he graduated with a bachelor's degree in 1925 . In 1927 he entered the diplomatic service as Third Secretary and was promoted to Second Secretary in 1929 . As such, he worked at the representation in Peru from 1929 to 1931 and then at the embassy in Portugal between 1931 and 1933 , before being transferred to the embassy in Argentina in 1934 . In July 1937 he became Second Secretary at the Embassy in Chile and was promoted to First Secretary in December 1938. He then worked from 1939 to 1941 in the office of the Secretary General of the Ministry of Foreign Affairs and in February 1941 became head of cabinet in the Ministry of Justice and Home Affairs. As such, he acted as acting minister for justice and home affairs between August 1941 and 1942 when Francisco Campos fell ill . At the same time he became a member of the State Commission for Economic Studies and the American-Brazilian Technical Commission in 1942.

At the beginning of 1943 Leitão da Cunha was on a special diplomatic mission in North Africa for three months and was then transferred back to the embassy in Portugal in April 1943, where he was promoted to second class deputy in December 1943. At the same time he acted as a delegate to the French Committee for National Liberation CFLN, where he met General Charles de Gaulle and General Henri Giraud . In July 1944 he became a diplomatic observer in Italy and shortly afterwards consul general in Rome and after the end of the Second World War in June 1945 consul general in Geneva . In April 1946 he was promoted to Legation Council and entrusted with diplomatic talks with the Spanish government of Francisco Franco . In the meantime he acted from November 1947 to June 1948 as head of the delegation to the UN Special Commission for the Balkans in Saloniki . In March 1950 he was appointed envoy to the embassy in Spain and in June 1950 envoy Extraordinary and Minister Plenipotentiary in Finland , where he worked until March 1952. In June 1952 he was promoted to first class envoy and in August 1952 he was appointed head of the cultural policy department in the Foreign Ministry and in October 1952 as deputy general secretary of the foreign ministry, before he was briefly general secretary of the foreign ministry between August and September 1954.

Vasco Leitão da Cunha then became Ambassador to Belgium in September 1954 and was accredited as such as a representative in Luxembourg until November 1956 . On November 27, 1956, he took over the post of ambassador to Cuba and witnessed the Cuban Revolution there , which finally led to Fidel Castro taking office on January 1, 1959 . In this role, he prepared the visit of the presidential candidate Jânio Quadros to Cuba in March 1960 . After Jânio Quadros took up the post of President in January 1961 , he was dismissed as Ambassador to Cuba and initially took over the post of State Secretary and in February 1961 again the Office of Secretary General of the Foreign Ministry. In this function, he was also briefly acting foreign minister as the representative of Afonso Arinos de Melo Franco in April 1961 and was instrumental in formulating the Política Externa Independente , the independent foreign policy of Brazil at the beginning of the 1960s. After the resumption of diplomatic relations with the Soviet Union in November 1961 and the re-establishment of the embassy on January 8, 1962, he took over the post of ambassador to the Soviet Union on April 25, 1962 , which he held until February 14, 1964.

After his return to Brazil, Vasco Tristão Leitão da Cunha was appointed Foreign Minister (Ministro das Relações Exteriores) by President Pascoal Ranieri Mazzilli on April 6, 1964 and held this office until December 7, 1965. He also took over General until the President took office Humberto de Alencar Castelo Branco also held the office of Minister of Health (Ministro da Saúde) on April 15, 1964 . During his tenure as Foreign Minister he continued Brazil’s independent foreign policy, which in addition to relations with the American continent (Aliança continental) also envisaged the establishment of diplomatic relations with other states such as Malaysia and South Vietnam in January 1965. In April 1965 there was a crisis in the Dominican Republic , which led to the invasion of troops from the US Army and the Organization of American States (OAS) with the participation of Brazil. In October 1965, the Military Government passed Institutional Law No. 2 (Ato Institucional Número Dois) , which further undermined the 1946 Constitution and gave the military regime additional powers based on the election results of early October 1965. On November 17, 1965, the Second Extraordinary Inter-American Conference began in Rio de Janeiro, calling on the OAS member states to continue their strategies and measures to combat “subversion on the continent”.

After the end of the conference, Leitão da Cunha was dismissed as Foreign Minister by President Castelo Branco on December 7, 1965, whereupon the Secretary General of the Foreign Ministry Antônio Borges Leal Castelo Branco Filho took over this office again provisionally. He himself was appointed ambassador to the United States on January 28, 1966, succeeding Juraci Magalhães . He held this office until his retirement in July 1968. He was then a member of the board of directors of Banco Mercantil de São Paulo S / A , the international advisory body of the Morgan Guarantee Trust Company , the board of Standard Electric , the international Advisory board of ITT, Inc. , Chrysler and Sousa Cruz and the Associação Comercial do Rio de Janeiro (ACRJ).