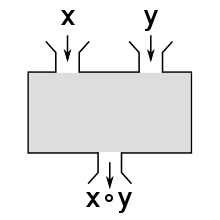 Illustration of a two-digit link that returns the result from the two arguments and .

In mathematics , linkage is used as a generic term for various operations : In addition to the basic arithmetic arithmetic operations ( addition , subtraction , etc.), it also covers geometric operations (such as mirroring , rotation, etc.) and other arithmetic operations and occasionally logical operators . A link defines how mathematical objects of the same or similar type determine another object with one another. In the case of a relatively small number of elements and a link with only a few, such as two places, where elements can be used as operands, this definition is clearly possible using a link table in which, for example, B. for a 2-digit link all possible pairings are listed and their result is given, the result of the calculation.

The word linkage is also used to denote the sequential execution (concatenation) of functions .

For a natural number, let sets and another set be given. Then every mapping of the Cartesian product is referred to as a -digit link . Such a link uniquely assigns an element of the set to each tuple with . Of course, the quantities and can partly or wholly coincide.

In the special case that only occurs, the link becomes

or -ary operation on called. Occurs at least once among them, for example

for a with so the link is called the outer -digit link on with the operator area . The elements of are then called operators.

Every -digit link can be understood as a -digit relation .

given an outer two-digit link on with operator scope and the only operator .

As a zero-digit combination of a lot for a lot one can figure out of to be considered. It applies

therefore, each of these figures can be specified as follows:

Each zero-digit link is therefore constant and can in turn be understood as the constant .

Since it always applies, every zero-digit link can be viewed as an inner link on :

Single-digit links are mappings of a set after a set .

is a one-digit shortcut.

The term “link” is particularly often used in the sense of a two-digit link. Important special cases are internal and external connections. Two-digit links are often noted in infix notation, i.e. with a symbol such as a plus sign between the two operands.

Rarely one speaks of three- and multi-digit links . Examples of a three-digit link are:

If in the above definition for (total) links the term of the (totally understood) mapping is replaced by partial mapping , then one speaks of a partial link : It is then permitted that a link value ( ie image value, function value) is assigned.

In algebra , links are used to define algebraic structures . The links must meet certain conditions ( axioms ). In the case of partial algebras , partial links are also permitted.

For example, a semigroup is a set with an interior two-digit link that satisfies the associative law. The requirement that the result of the connection should again be an element of the given set (isolation) is already contained in the definition of the inner connection.