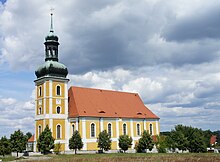 The Roman Catholic pilgrimage church Rosenthal , in Sorbian Putniska cyrkej w Róžeńće , is a baroque hall church in the Rosenthal district of the Ralbitz-Rosenthal municipality in the Bautzen district in Saxony . It belongs to the parish of St. Katharina Ralbitz in the Diocese of Dresden-Meißen and can be seen from afar with its memorable silhouette. The church is the central place of pilgrimage for the Catholic Sorbs in the area.

The Rosenthal pilgrimage church bears the patronage of Saint Maria von der Linde. Rosenthal has been a place of pilgrimage since the 16th century at the latest. Since 1754 the church has been under the patronage of the Cistercian Abbey of Marienstern ( Panschwitz-Kuckau ). The current building was built in 1778. In April 1945 the church burned down as a result of fighting , the surrounding walls and vaults were preserved. After the rubble was cleared in 1945, the roof was first covered with straw and later with tiles. During the reconstruction, the sacristies were relocated from the east side nave yokes to the outer walls. The interior work was carried out in neo-baroque forms until 1952. The facades are structured by flat pillars with arched windows over a wide cornice. A high hipped roof and a mighty square west tower with a strongly curved hood and lantern increase the effect of the church from a distance. The spacious three-aisled hall church with five bays is closed with barrel vaults with stitch caps on strong cross pillars. The organ gallery is located in the west yoke. 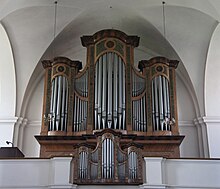 The altar, which contains the miraculous image , a small statue of the Virgin Mary from the 2nd half of the 15th century, is assembled from parts of a late baroque altar from the St. Marienthal monastery ( Ostritz -Marienthal). It shows a predella with lateral volutes and above it a structure divided by pillars with leaf hangers. Large wooden figures of Saints Benedict and Bernhard are arranged in niches on the side , and above them a strongly moving tower with a crucifix and a dove. The pulpit was created in baroque forms after 1945. The tabernacle , created after 1700 by the Bautzen sculptor Georg Vater, stands on the east wall of the south aisle and consists of a shrine-like structure with angels attached to the side. Of the figures on the pillars, an Anna Selbdritt from around 1500 is remarkable. The organ is a work by Jehmlich from 1949 in a case with baroque shapes.

Next to the church is the administration, a simple building from 1755 with two floors and a central risalit . On the side wings there are niches with figures of saints between the windows, above the front door there is a sandstone plaque with the coat of arms of the abbess of the Marienstern monastery, Cordula Sommer.