Walter Benigni was born the son of a railway employee , graduated from the Federal College for Wood Processing and then entered the federal service. Before he started working full-time in photography from 1960 , he worked in the federal service for the B-Gendarmerie . Walter Benigni was the initiator of the state association of photographers and a non-competitive state photo show. In 1962 he married Klara Köttner-Benigni . The couple created several volumes of poetry to which Benigni contributed the pictures. You lived in Eisenstadt . Walter Benigni had children from his first marriage. He was buried on March 28, 2019, like his wife, at the Stadtfriedhof (Urnenhain No. 12) in Eisenstadt. 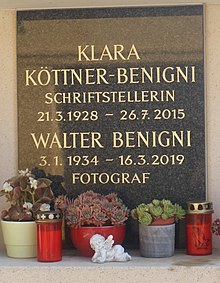 In the summer of 1978 his first exhibition was opened in the Cselley mill in Oslip . In cooperation with Slovak photographers, he then organized exhibitions in the Burgenland State Museum , in Bratislava and in Mattersburg . In 1992, 50 years after the Wannsee Conference , 3sat presented an exhibition Begnini on the subject.

In addition to books, pictures by Walter Benigni with explanations have also appeared in exhibition catalogs, for example on the personnel in Esterházy Palace in Eisenstadt in 1982 and on the one in the Novomeský gallery in Bratislava in 1991 in Slovak. Together with colleagues he was represented in the anthology "Photography in the 20th Century" of the " Austrian Society for Photography " in 2002 and in 2005 in the anthology "VÖAV Photogallery" of the "Association of Austrian Amateur Photographers Associations ". In recent years Benigni has participated in exhibitions, but has also arranged exhibitions as far as Vienna.

Benigni's photographs have been used in various books. Among others in:

Benigni was an honorary member (Hon. ÖGPh) of the Austrian Society for Photography .