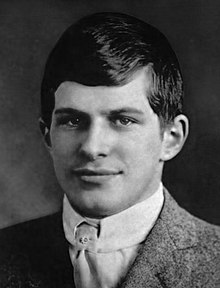 William James Sidis on the occasion of graduating in 1914

William James Sidis (born April 1, 1898 in New York City , † July 17, 1944 in Boston ) was an American child prodigy with exceptional math and language skills. Noteworthy is his book The Animate and the Inanimate , published in 1920 , in which he speculates about the origin of life in the context of thermodynamics . Sidis was raised in a special way by his father, the psychiatrist Boris Sidis , who wished that his son was gifted and raised him as a gifted man. Sidis first became famous for its precociousness and later for its eccentricity and withdrawal from public life. In the end he renounced mathematics altogether and wrote about other subjects under a number of pseudonyms . He entered Harvard University at the age of 11 and, as an adult, was said to have an extremely high IQ and a command of about 25 languages ​​and dialects. Some of these claims were not verified, but many of his contemporaries, including Norbert Wiener , Daniel Frost Comstock, and William James , supported the claim that he was extremely intelligent.

William was named after his godfather, friend and colleague of his father, the American philosopher William James . Boris was a psychiatrist, published numerous books and articles, and pioneered psychopathology and abnormal psychology. He was polyglot and his son William was to become multilingual from a young age.

Parents raised him from early childhood using special learning methods aimed at raising him to be a genius. He was already able to read at the age of 18 months ( hyperlexia ) and by the time he was eight he had already written four books. By the age of eight he is said to have taught himself eight languages ​​( Latin , Greek , French , Russian , German , Hebrew , Turkish , Turkish and Armenian ) and invented another which he called "Vendergood".

His father wanted him to enroll at the university when he was 9 years old, but the university refused because he was still a child. In 1909, Sidis set a record by becoming the youngest person to enroll at Harvard University . He began his studies at Harvard University on October 11, 1909, at the age of eleven as part of a special program for gifted children. a. young people like Norbert Wiener and Roger Sessions were part of it. By early 1910, Sidis' mastery of higher mathematics was so great that he gave lectures on four-dimensional bodies at the Harvard Mathematical Club , which earned him national attention. Cybernetics pioneer Norbert Wiener, also a child prodigy who at the time also attended Harvard and knew Sidis, later explained in his book Ex-Prodigy (Ex-child prodigy): honored ... the lecture represented the triumph of the unsupported efforts of a very brilliant child. " MIT physics professor Daniel F. Comstock was full of praise: " Of all the child prodigies, Carl Friedrich Gauß is the only example in history that Sidis resembles. I predict that the young Sidis will be a great astronomical mathematician. He will be new Developing theories and inventing new ways of calculating astronomical phenomena. I believe that he will be a great mathematician who will be a leader in this science in the future. "Sidis began studying full-time in 1910 and graduated on June 18, 1914, aged 16 Years, his Bachelor of Arts degree, cum laude .

The parents published academic articles about their son's amazing development. The Harward student William James Sidis found the great interest of the media and academic institutions overwhelming. Shortly after graduating, he told reporters that he wanted the perfect life, which for him meant a life of seclusion. He interviewed a reporter for the Boston Herald . The newspaper reported on Sidis' vow to remain celibate and never marry, as he did not like women. He later developed a strong affection for Martha Foley, who was a year older than him. He later enrolled at the Harvard Graduate School of Arts and Sciences.

According to "The Prodigy: a Biography of William James Sidis," he briefly served with the League of Nations before his departure because US President Woodrow Wilson refused to withdraw the troops stationed during the First World War. He was frank about his pacifism .

After a group of Harvard students physically threatened Sidis, his parents got him a job at the William Marsh Rice Institute for the Advancement of Letters, Science, and Art (now Rice University ) in Houston , Texas, as an assistant in maths classes. He came to Rice in December 1915 at the age of 17, where he was working towards his doctorate.

Sidis taught three classes: Euclidean geometry, non-Euclidean geometry, and first-semester math (he wrote a textbook for the Euclidean geometry course in Greek). In less than a year, Sidis left his post and returned to New England, frustrated with the student council, teaching requirements, and treatment from his students who were older than himself. When a friend later asked him why he had left, he replied: "I never knew why they gave me the job in the first place - I am not a good teacher. I did not go: I was asked to go." Sidis gave up his pursuit of a college degree in mathematics and enrolled at Harvard Law School in September 1916 , but retired in his senior year in March 1919.

At 16, however, he had had enough and could not finish his studies despite his outstanding intelligence. Much to the annoyance of his parents, he decided to rebel against those around him and was arrested in 1919 for inciting rebellion and recruiting young people for the communist movement. Due to his parents' influence, he was released from prison. But his defiance against society and against his parents was unbroken. He continued to organize protests against capitalism and was not intimidated by the authorities. He was eventually sentenced to two years in prison.

In 1919, shortly after retiring from law school, Sidis was arrested for participating in a socialist parade in Boston that led to rioting. Under the 1918 Insurrection Act, he was sentenced to 18 months in prison by Roxbury City Court Judge Albert F. Hayden. Sidis' arrest was featured prominently in the newspapers for being a local figure through his early Harvard degree. During the trial, Sidis stated that he was a World War I conscientious objector, a socialist and that he did not believe in one God as the "Great Chief of Christians". He later developed his own libertarian philosophy based on individual rights and "American social continuity". His father negotiated with the district attorney that Sidis would not go to jail while his appeal was in court; instead, his parents kept him in their New Hampshire sanatorium for a year. They took him to California , where he spent another year. While he was in the sanatorium, his parents set about "reforming" him and threatened to transfer him to an asylum.

Topics Sidis dealt with in his scholarly writings, among others, were the fourth dimension , Native American history , cosmology and psychology . He also dealt with railroad and tram systems, on which he published a study under the pseudonym Frank Folupa .

Due to the media interest in his person, Sidis increasingly withdrew. He died of a brain haemorrhage in 1944 .