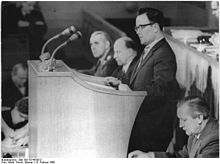 Wolfgang Heyl as a member of the People's Chamber (1960).

At the CDU peace colloquium in 1989, 2nd from left

Heyl, son of a merchant, attended elementary and high school in Borna . He completed an apprenticeship as a carpenter. He joined the NSDAP in 1939 at the age of 18 . From 1941 he did military service in the Wehrmacht . In 1945 he was briefly taken as a first lieutenant by Soviet and then American prisoners of war.

Chairwoman of the Leipzig District Executive of the CDU

Party leader of the GDR CDU