Wolfgang Benjamin Klemperer (born January 18, 1893 in Dresden , † March 25, 1965 in Los Angeles , California ) was an aerospace scientist and engineer who was one of the pioneers of early aviation . 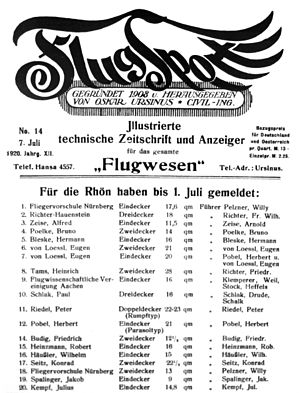 Registration list for the Rhön 1920 in aviation ; Klemperer started for the Aviation Science Association Aachen

Wolfgang was born in Dresden as the son of the Austrian nationals Leon and Charlotte Klemperer . After elementary school, he built his first motorized aircraft in 1912. During the First World War , he graduated from the aviation officer school of the kuk aviation troops in Wiener Neustadt in 1916 and came to the Isonzo front as an observer , where he carried out 43 missions. This was followed by his transfer to the Vienna Flieger-Arsenal , where, among other things, he developed a bomb target. At the end of the war he was trained as a pilot in Aspern . He has received three awards as an officer.

After his military service, Klemperer studied at the Technical University of Dresden , where he was active in the Dresden Aviation Technology Association (FVD) until he graduated as a qualified engineer .

As a graduate engineer, he moved to RWTH Aachen University in 1920 and became Theodore von Kármán's assistant in the field of aerospace and rocket research . In 1920 he won the first Rhön gliding competition on Schwatze Düvel with flights on September 4, 1920 in the categories of greatest distance ( flight distance 1830 m ) and longest flight ( flight duration of 2 min. 23 "5 seconds ) and received the following year the glider pilot certificate with the number 1 for the longest flight, a 13 minute overland flight with the Blue Mouse on August 30, 1921. He flew longer than Orville Wright (flight duration 9:45 min on October 24, 1911 in Kitty Hawk ) and Hans Gutermuth (flight duration 1:52 min on July 22, 1912 on the Wasserkuppe) before. Klemperer was also involved in the founding of the Aachen Aviation Science Association .

Klemperer became head of research and development at Zeppelin in Friedrichshafen in 1922 ; he was significantly involved in the planning of the airship LZ 126 ("USS Los Angeles") as well as in its flight tests in the USA.

After his doctorate as Dr.-Ing. at RWTH Aachen University he moved to the USA in 1924 and began working for the Good Year Zeppelin Corporation in Akron . From 1936 he worked for the Douglas Aircraft Company .

In 1958 he became a director at McDonnell Aircraft Corporation and headed the missile research division. His numerous publications and lectures in the field made him a world-renowned rocket scientist.

Klemperer has received numerous honors and awards such as honorary doctorates from the Vienna University of Technology, the American Institute for Aerospace, the American Astronomical Society and the British Interplanetary Society

In the course of his career he published regularly under his short name "WB Klemperer" in specialist magazines in aerodynamics, space travel and navigation, as well as on gliders. Klemperer also held numerous US patents.