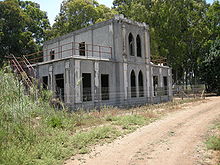 The Yarkon ( Hebrew נחל הירקון Nachal haYarkon ), in Luther's spelling Me-Jarkon (מיי ירקון Mej Jarqon , waters of the greenish / Jarkon; Jos 19.46  LUT ) is a 28 km long, year-round water-bearing river in Israel , whichrisesat Rosh HaAyin andflows into the Mediterraneannear Tel Aviv . It is the most abundant of all Mediterranean coastal rivers in Israel. “Yarkon” means “the greenish one” in Hebrew. Its Arabic name is Al-'Uja , which means "the meandering one".

The Yarkon rises near Rosh HaAyin . It is one of the few rivers in Israel that carry water all year round. “Water-bearing all year round” can also mean that only a trickle remains in late summer, but this does not apply to the Yarkon. The upper course of the river has a length of about 7 km and is characterized by high water quality.

A few hundred meters after the source, the river is dammed for a water catchment system built in the 1950s and some of the water is removed for the drinking water supply. Although a minimum flow into the river bed is ensured for nature conservation reasons, the previously existing average flow rate of the river (approx. 200 cubic meters / hour) was massively reduced by the intervention.

The Yarkon-Afek National Park is set up on the upper reaches of the Yarkon , a popular recreational destination with several historical and archaeological sights.

The river crosses the urban areas of Petach Tikwa , Hod Hasharon , Ramat Hasharon and Bnei Brak . The course of the river meanders strongly due to the moderate height difference. Many of the meanders are shaped like the Greek letter omega .

The tributaries of the Yarkon are, from the source to the mouth:

The tributaries are all wadis , so they do not carry water all year round.

As a year-round water-bearing river with a heavily pouring spring, the Yarkon has been an important water supplier for agriculture for centuries. In the Ottoman Empire, plantation owners who were directly adjacent to the Yarkon had the right to build their own pumping stations and draw water for their plantations directly from the Yarkon.

The Yarkon is one of the few rivers in Israel that has been used as a waterway.

The Yarkon Park in Tel Aviv and the Yarkon-Afek National Park at the source are important for local recreation and tourism. The Israel National Trail accompanies the river along its entire length.

Much of the water in the river was made up of sewage until recently , which resulted in massive environmental pollution .

In recent years, the river has been gradually rehabilitated . Today the water quality has already improved and the local flora and fauna reclaimed the river.