This article is about the singer-songwriter Al Stewart. For the trumpeter, see Al Stewart (Trumpeter) . 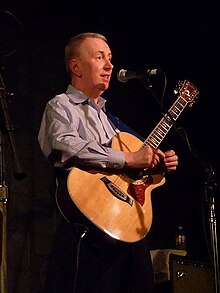 Al Stewart (born  September 5, 1945 in Glasgow ) is a British singer-songwriter .

Al Stewart's father died in a plane crash before giving birth to his son. He moved with his mother to Bournemouth in the south of England , where he attended school until 1962. During this time he learned guitar with Robert Fripp , which enabled him to appear as a member of several bands in his hometown.

Then he moved to London because the music scene was livelier there. There he appeared regularly in clubs, with Bob Dylan covers, his own titles and as an announcer for performers like Paul Simon , whose roommate he was for a few months. In 1966 he received his first recording contract with Decca Records .

His first single , The Elf , sold less than 500 copies. He moved to Columbia Records , where he released his debut album in 1967 . On Bedsitter Images , Stewart provided studies of a mostly bourgeois milieu and personally colored stories. The follow-up LP Love Chronicles , a declaration of love to his girlfriend at the time, was voted Folk Album of the Year by Melody Maker magazine . Stewart's third album, Zero She Flies , was produced by Roy Guest , like both previous albums. Stewart remained committed to acoustic music - despite a change of producer - on Orange , his fourth full-length player. The commercial success was still modest.

In 1973 Stewart's first concept album was released : Past, Present & Future . The artist's growing historical interest came to the fore. Inspired by the prophecies of Nostradamus , about whom the album contains a title of the same name, a title should be dedicated to every decade of the 20th century that has passed to date. Even if the concept was not implemented in this form, Stewart endeavored to take a critical look at recent American and European history. As his first North American tour in 1974 suggested, he increasingly aimed at the US market in the following years .

He first appeared in the US charts in 1975 with the album Modern Times , produced by Alan Parsons . He was also responsible for the two most commercially successful albums that Stewart released: Year of the Cat (1976) and Time Passages (1978). The Year of the Cat album was very successful in Germany, Great Britain and the United States. Singles under the same titles made it into the top 40 in both the UK and the US. In lower regions of the charts were songs like On the Border , Song on the Radio and most recently Midnight Rocks from his 1980 album 24 carrots . Despite a clear focus on commercial success, individual songs with historical themes were also found on his best-selling albums.

Stewart's hit streak ended as abruptly as it began. In addition to songs that were suitable for the country, the shy artist lacked media impact. Neither the studio album Indian Summer (1981), which was supplemented with live recordings, nor its successor Russians & Americans (1984) were able to build on past successes. Contractual difficulties prevented Stewart from publishing new material for four years. Not very keen to experiment, he presented himself on the 1988 album Last Days of the Century , as well as on Famous Last Words (1993). Both albums were produced by Peter White , with whom Stewart played on the live album Rhymes in Rooms .

His concept album Between the wars (1995) about the period between the First and Second World War was created in cooperation with the ex-guitarist of the Wings , Laurence Juber . Stewart dealt with Josef Stalin ( Joe the Georgian ), the aviation pioneer Charles Lindbergh ( Lindy Comes to Town ) and the American actress Marion Davies ( Marion the Châtelaine ) , among others . In 2000, the passionate amateur cellar master dealt with the topic of wine on another concept album called Down in the Cellar . Since his American label Miramar Records had to file for bankruptcy before it was released, the CD was only released in Europe by EMI . On both sides of the Atlantic, the album received less broad and critical reception; so the renewed collaboration with Laurence Juber was rated as a mistake.

In 2005 he delivered a thematically freer work with A Beach Full of Shells . He concentrated once more on his “core competencies”: lovingly told stories in the form of digestible orchestrated mid- to up-tempo songs, which the critics welcomed as a successful quality assurance. Personalities who inspired him to write a title were the German pilot Max Immelmann ( The Immelman turn ), the British writer Edward Lear ( Mr. Lear ) and the first wife of Henry VIII , Katharina von Aragón ( Katherine of Oregon ). Other songs dealt with Leonardo's Mona Lisa ( Mona lisa talking ) and Violet Bonham Carter , the daughter of the British Prime Minister ( Somewhere in England 1915 ). As on most previous albums, Al Stewart had composed and written all of the tracks himself. He is regularly on stage with Dave Nachmanoff , which was documented live with Dave Nachmanoff on Uncorked - Al Stewart in 2009 .