Albert Eckhout (* around 1607 in Groningen ; † late 1665 or early 1666 in Groningen) was a Dutch painter of portraits and still lifes . His paintings represent a significant documentation of early colonial Brazilian history. 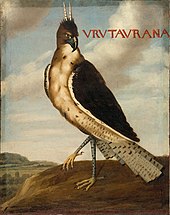 Nothing is known about Albert Eckhout's artistic training.

From 1637 to 1644 Eckhout took part in the eight-year expedition to Brazil under the governor and commander-in-chief Johann Moritz von Nassau-Siegen in addition to the painter Frans Post , the historiographer Caspar van Baerle , the doctor and botanist Willem Piso and the cartographer and astronomer Georg Marggraf of the Dutch West India Company , which, in addition to pacifying the region, had the task of natural history research in Brazil. Unlike Frans Post, Eckhout's focus was not on the Brazilian landscapes, but on the people and their ethnic diversity. In the years 1641–1644 he portrayed Indians, blacks and mulattos in their respective surroundings and thus enabled considerable insights into their way of life at that time. He also painted still lifes with detailed views of tropical fruits as well as plants and birds.

Returned to the Netherlands in 1645, he lived in Groningen and Amersfoort for a few years . On the recommendation of Johann Moritz, he became court painter to Johann Georg II of Saxony in Dresden in 1653 . It is assumed that he painted the ceiling in the Hoflößnitz in Radebeul from 1653–1659 , but the pictures are unsigned and undated. They show eighty Brazilian birds. During this time, he is said to have painted ten oil paintings of exotic people for Pretzsch Castle , who had been in Schwedt Castle since 1928 and burned there in 1945. In 1663 he returned to Groningen, where he received city rights in 1664.

Johann Moritz gave numerous paintings by Eckhout to his nephew Friedrich III in 1652 . from Denmark and Norway . A larger part of his works, a total of 23 paintings, is therefore in the National Museum in Copenhagen . Hundreds of drawings were given away to Friedrich Wilhelm von Brandenburg and came to the Prussian State Library ( shelf mark Libri Picturati A 32–38). After they had been relocated during World War II and they disappeared, they were not rediscovered until 1977 in the Jagiellonian Library in Krakow .

In 1678 or 1679 Johann Moritz gave Louis XIV of France eight paintings that Eckhout had painted on his return to the Netherlands. After these tapestries were made in The Hague in 1668 , a second series of tapestries was made in the Gobelin Manufactory from 1687 . The paintings are no longer preserved.