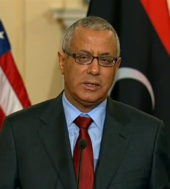 Ali Seidan or Sidan ( Arabic علي زيدان, DMG ʿAlī Zīdān ; * 1950 ) is a Libyan politician and former diplomat. From October 2012 to March 2014 he was the country's prime minister.

Seidan received a legal education and did his alma mater at Jawaharlal Nehru University in New Delhi . He was the Libyan ambassador to India until 1980 . Until 2011 he was a member of the opposition National Front for the Rescue of Libya (NFSL) led by Mohammed Yusef el-Megarief , and from Geneva he campaigned for the observation of human rights in Libya. He has been a member of the General National Congress since 2012 .

At the suggestion of the Alliance of National Forces by Mahmud Jibril , Seidan was elected Prime Minister on October 14, 2012 by the General National Congress with 93 out of 200 votes. He sat against the candidate of the Muslim Brotherhood affiliated Justice and Construction Party through. His predecessor Mustafa Abu Shagur from the National Front had previously been overthrown by a vote of no confidence. On October 31, 2012, his government was confirmed by the National Congress.

Seidan during the 2013 World Economic Forum

In the morning hours of October 10, 2013, Seidan was kidnapped from the Corinthia Hotel in Tripoli by a Libyan militia . The motive is still unclear. Some reports suggest a connection with the capture of Abu Anas al-Liby , a suspected mastermind of the terrorist attacks on the United States embassies in Dar es Salaam and Nairobi , on October 5th in Tripoli by American forces. Seidan had met with the von al-Liby family hours before his abduction. The Attorney General's Office denied the kidnappers' allegations that they had an arrest warrant for Seidan. Seidan was released hours after his abduction.

After the self-proclaimed "autonomous government" of the city of Ajdabiya succeeded in letting the Morning Glory ship, which was loaded with crude oil, leave the port of al Sidra in order to sell its cargo past the state oil company, although Seidan had promised to prevent this. he was deposed on March 11, 2014 by the Libyan parliament by a vote of no confidence . Defense Minister Abdullah Thenni was appointed interim successor. Immediately after the vote of no confidence, an arrest warrant was issued against Seidan. Nevertheless, he managed to leave for Europe. Seidan is accused of corruption and mismanagement in connection with the separatists' illegal oil sales.

Heads of Government of Libya