Antestor ( Latin for: 'I'll call as a witness') is a Norwegian metal band that was founded in 1990 under the name Crush Evil. Musically, it is based on Doom Metal , Death Metal and Black Metal . Since the content of the lyrics is Christian and the Black Metal is based on Satanism , the classification as a Black Metal band is rejected. The band called their genre as "Sorrow Metal". In 2007 the band announced that they would no longer perform in the future. In 2010, after having had a full line-up again, the band announced that they wanted to perform again.

Antestor's biography is shaped by the dualism of the Christian message of her lyrics and the environment of Black Metal .

The band formed in Oslo in 1990 under the name Crush Evil. The first demo was recorded in August 1991 with The Defeat of Satan . Musically, slow Death Metal mixed with Doom Metal is presented. The band broke up in 1992 and re-founded the following year under the name Antestor. The second demo Despair was recorded in the same year. On the musical side, the focus was now almost exclusively on Doom Metal, the speed of the music slowed down significantly.

In 1994 Antestor recorded her debut album Martyrium , which was released as a bootleg cassette on the Morphine Records label . Then the band left the label. She states on her MySpace page that problems with the label prevented it from being released on a larger scale. At Martyrium , elements of melodic black metal can be recognized in the music for the first time. The sound is rough and harsh, the melody is reminiscent of the style of the "second wave" of Black Metal.

It wasn't until 1997 that Antestor started looking for a new label with another demo tape ( Kongsblod ). Among others, the label Cacophonous Records from England showed interest and soon a record deal was signed. Cacophonous Records mostly leads black metal and death metal bands, some of which openly profess satanic views. Cacophonous censored some passages in the lyrics, so all occurrences of “God” and “Jesus” are left out in the booklet for “The Return of The Black Death”. In 1998 the demo was released as an album, the name Kongsblod (' King's Blood ') was changed to The Return of The Black Death . After the album was released, Antestor left the label, which has ceased production of the album to this day. Antestor accuses the label of having dropped the band when it noticed their Christian attitude and claims that they never received any money from Cacophonous. The music on this CD is described by the few reviewers who have reviewed this CD as dark and melancholy.

In the following years Antestor suffered from financial bottlenecks. In addition, the line-up became unstable as the drummer, singer and guitarist left the band for personal reasons. Lars "Vemod" Stokstad stayed with the band as the composer, live performances were not possible for the next three years. That only changed when a, from the group's point of view, a trustworthy label was found in Endtime Productions ( Sweden ), which then released the album Martyrium as a full album in 2000 . Endtime Productions has only run Christian bands to this day. Antestor still had a valid contract with Cacophonous at the time, but still signed with Endtime Productions.

The Defeat of Satan followed three years later , which contained the two demos The Defeat of Satan and Despair . Strengthened by Ronny "Vrede" Hansen and Morten Sigmund "Sygmoon" Magerøy from Vaakevandring (this band had just split up), Lars Stockstad and Vegard Undal set about writing new songs. Since the position of drummer was still vacant, a session drummer had to be hired. Jan Axel "Hellhammer" Blomberg from Mayhem made himself available and together in autumn / winter 2003 the EP Det Tapte Liv and then the album The Forsaken were recorded. Hellhammer's commitment has been and is controversial in the press and fans. Ronny "Vrede" Hansen said the following in an interview:

“First and foremost, Jan Axel“ Hellhammer ”is a professional musician. He started his career in the secular and even worse part of the scene, but he doesn't care what is secular or Christian. He knew from the start what Antestor stood for. "

The EP released in spring 2004 via Endtime Productions was followed by the album in early 2005. The album cover of Det Tapte Liv shows a drawing of the stave church Borgund . Furthermore, the covers of the EP and the album, placed next to each other, create a single picture of this church. The covers of both releases were drawn by Kristian "Necrolord" Wåhlin , who had previously designed covers for Bathory , Therion , Dissection and Emperor .

The band rarely played live, most recently only at explicitly Christian music festivals. Examples of performances that have taken place are the concerts at Bobfest in Stockholm in 2000 and Linköping in 2004 , as well as at Nordic Fest 2004 in Oslo . 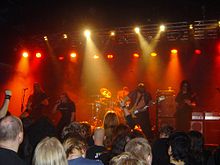 Antestor at the Endtime Festival, 2007

Singer Ronny Hansen at the Blast of Eternity Festival in Neckarsulm , 2012

At the end of March 2007 the band played a concert with numerous session musicians at the Endtime Festival in Halmstad . At this concert Antestor announced that this would be her last appearance. In a message in the Endtime Productions forum and a bulletin with identical content on myspace , the reasons were given that there had been no rehearsals for two and a half years and that Antestor only consisted of the two members Vrede and Vemod. Thanks to the head of Endtime Productions, a full line-up came about for the appearance at the Endtime Festival.

From 2011 and 2012, there were again live appearances at the most important black metal festivals in Central Europe ( Elements of Rock (CH), Blast of Eternity (D), Brainstorm Festival (NL)) with a new keyboardist and drummer. At the same time, the new album Omen was recorded, produced and released, which was released in December 2012 on the Bombworks Records label.

While the band was still primarily oriented towards Death / Doom Metal with correspondingly slow songs and growling vocals during the first releases , the band turned musically to Black Metal with the album The Return of the Black Death . From now on, screaming vocals as well as guitar riffs and drum passages typical of the genre can be found with increased speed. The keyboard also plays a central role, gaining space for the epic interludes and introductions typical of Black Metal. For example, in the first three minutes of the song Sorg, only the keyboard is responsible for leading the melody.

With the album The Forsaken , the band developed more in the direction of a more technical style than could be found on The Return of the Black Death . Guitar solos can now also be found on The Forsaken . Furthermore, the quality of the production has also been improved compared to The Return of the Black Death . With the entry of two ex-members of Vaakevandring, the style also became more melodic and atmospheric.

In the lyrics, hope and despair, but also the personal Christian faith of the band members are discussed. Therefore, many metal fans reject the classification of Antestor as a black metal band, as it is lyrically and ideologically at odds with black metal. The texts are mostly in English . Norwegian lyrics are found less often, but they dominate the album The Return of the Black Death . For this album only some of the lyrics are listed in the booklet; Texts directly related to Jesus Christ have been left out.

The song A Sovereign Fortress , for example, deals with thanksgiving to God who protects and supports the lyrical self from birth. For example, in the chorus of this song it says:

"You Are My Hope, O Lord, My Trust, O Lord, Since Boyhood
From Birth I Have Leaned Upon You
My Protector Since I Left My Mother's Womb"

"You are my hope, O Lord, my trust, O Lord, since I was a child
I have relied on you from birth,
my protector, since I emerged from the womb"

- Antestor : The Return of the Black Death , Title No. 2: A Sovereign Fortress ; Cacophonous Records, 1998

Sorg (Norwegian for: 'sorrow', 'sorrow', 'sorrow'), on the other hand, deals with the themes of sorrow and the search for hope, whereby the song is based on gloomy metaphors and the text does not appear explicitly Christian, even ends negatively. An example (in Norwegian):

"Before that,
any ability should be
leveled at the highest level for that matter, he must have any additional items at the same
time and forlatt"

"How am I supposed to be able to live?
My soul is strong [ lit .: high] hateful
grief is what I feel
all so lonely and abandoned"

Another title that also takes up a somber, but this time Christian theme, is Ancient Prophecy . The text advises the recipient that man is sinful and that no one can escape God's judgment. Antestor also deals with topics such as suicide , doubts about the certainty of salvation and the longing for death in her texts , which is rare for a Christian band. An example from the lyrics to Betrayed from the album The Forsaken :

Antestor is one of the few bands in the Christian metal scene who wear corpsepaint on their appearances and in photos . An example of this are the pictures in the booklet of the album The Return of the Black Death . In addition, artificial blood is sometimes used, which, for example, the session bassist Daniel Ravn Fufjord used when performing at the 2004 Bobfest .

Criticism from the black metal scene

The former guitarist of Mayhem , Øystein "Euronymous" Aarseth , to whom the origins of the Norwegian black metal scene can be traced back, said in the Orcustus - Fanzine regarding Antestor that the black metal scene had plans against the band - back then under the name Crush Evil - proceed:

“BUT - when it comes to bands like Crush Evil, we must take serious action. It's bad enough to have a couple of society bands, but a CHRISTIAN band is too much. But don't worry, we have plans. They will not continue for a very long time. "

“BUT - when it comes to bands like Crush Evil, we have to take serious action. It's bad enough to have some social bands, but one CHRISTIAN band is too much. But don't worry, we have plans. You won't go on much longer. "

A breakup of the band could not be achieved, especially since Aarseth was murdered a few months after this statement by Varg Vikernes . Eleven years later, Mayhem's drummer, Jan Axel “Hellhammer” Blomberg, was hired as a guest musician for Det Tapte Liv and The Forsaken .

During a tour of South America in January 2012 in Belo Horizonte, Brazil, there were protests and riots on the part of anti-Christian metal fans outside the club. The police had to be deployed and the band had to be escorted out of the club.