After a short military career, Archibald Campbell went into politics and became one of the commissioners for the Act of Union 1707 in 1706 . On October 19, 1706 he was given the hereditary Scottish nobility titles Earl of Ilay , as well as Lord Oransay, Dunoon and Arase . He was seriously injured in the Battle of Sherriffmuir (1715). 1707 he was elected to one of 16 representatives of the Peers of Scotland ( Representative Peer ) in the new British House of Lords . During the tenures of Sir Robert Walpole (1721-1742), Spencer Compton, 1st Earl of Wilmington (1742-1743) and Henry Pelham (1743-1754) he ruled, on the one hand through the power of the Campbells, on the other hand with the support of Government, politics in Scotland. 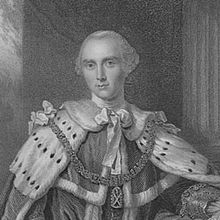 Campbell was one of the founders of the Royal Bank of Scotland (RBS), which was established by royal decree in 1727, and served as the bank's first governor. His portrait - based on a painting by Allan Ramsay - has appeared on the front (with the description Lord Ilay, First Governor ) and as a watermark on all Royal Bank of Scotland banknotes since 1987 .

Archibald Campbell rebuilt the ancestral castle of the Campbells Inveraray Castle and is considered the founder of the place Inveraray . The Duke was an avid botanist and had a large number of exotic plants and trees imported. Horace Walpole even nicknamed him Treemonger . After his death, his nephew John Stuart, 3rd Earl of Bute (1713–1792) inherited his large garden; this was the basis of the later famous Royal Botanic Gardens in Kew . They were significantly expanded by Princess Augusta von Sachsen-Gotha -Altenburg, widow of Friedrich Ludwig , the Prince of Wales . In his honor, The Duke of Argyll's Tea Tree ( common wolfberry ), an imported shrub, was named after him.

Name in different phases of life