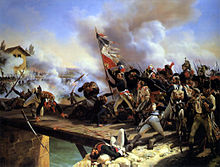 Napoléon Bonaparte , General en chef of the Armée d'Italie , on the bridge at Arcole .

The operational area was initially limited to the coast and the area of ​​the Alpes-Maritimes until Napoleon Bonaparte took command and led them in two remarkable campaigns to Italy .

Général Bonaparte takes over the army

Before Napoleon Bonaparte took over the command, the army was poorly fed, barely paid and could only survive by marauding . There were hardly any uniforms or shoes. When Napoleon arrived (March 27, 1796), the troops consisted of an indisciplined bunch. Royalist songs were sung and a “Compagnie du Dauphin” (Crown Prince's company) was set up. The first thing he did was improve the food supply and restore discipline as much as possible.

He punished the officers who had undermined discipline by shouting “Vive le roi” (“Long live the King”), and released the “13 e régiment de hussars” (13th hussar regiment) , which was only set up on January 31, 1795, for lack of discipline and another regiment that mutinied at the end of March. The first victories, the improvement in the food situation and the resumption of wages increased the willingness to fight considerably. With the help of the "contributions de guerre" ( war contributions ) that were imposed on the conquered parts of the country and cities, money was returned to the war chest.

There are only private records from letters and diaries about the high failures up to 1797, as these were officially hushed up.