The Arrogant class was a class of four protected cruisers of the Royal Navy that were built at various naval shipyards from 1895. The four cruisers were the Royal Navy's first class, fully equipped with water tube boilers . They should be used with the fleet and, if necessary, finally sink disabled ships by ramming them. They were therefore given a reinforced bow with ram stems and a specially armored command post.

The HMS Gladiator was lost in a collision in the Solent in 1908. When the First World War broke out , of the three remaining Arrogant class cruisers, only the HMS Vindictive was still in active service in the 9th cruiser squadron in the Atlantic. She was sunk as a block ship on May 10, 1918 during the second attack on Ostend . The HMS Arrogant and the HMS Forte ex Furious survived the war as barges and were sold for demolition in 1923.

The four Arrogant class cruisers , like the previous Eclipse class, were ordered under the Spencer Naval Program of 1893, which updated the British Naval Act of 1889. They should be used with the fleet and, if necessary, finally sink disabled ships by ramming them. You should therefore get increased maneuverability, which should be achieved by the short length and the installation of two oars. Because of their special task, they were given a reinforced bow with ram stems and a specially armored command post.

A mixed-caliber battery was also retained, with four 6-inch L / 40 Armstrong rapid-fire guns installed. In addition to the bow gun and the stern gun, there were two guns in front each in casemates, which could participate in the bow and broadside fire. From 1903, the four cruisers were equipped with ten modern 6-inch L / 45-Mk.VII guns instead of the mixed battery of 6-inch and 4.7-inch guns. The light weapons were located between the side battery, in the area of ​​the command posts, in the combat marshes that were initially available and in casemates near the bow and stern.

The four cruisers of the Arrogant class were the first class in which water tube boilers of the Belleville type were installed on all ships . In three boiler rooms there were six boilers each and three chimneys above them, as on the following protected cruisers of the Highflyer , Challenger and Topaze class .

The keel laying of the four cruisers from state shipyards took place between 1895 and 1896 and the HMS Arrogant was launched on May 26, 1896 as the first ship of the class in Devonport . As the last ship of the class, the HMS Vindictive came into service on July 4, 1900. The cruisers served in the naval units in the Atlantic and Mediterranean. Like other cruisers, they were the subject of a dispute about equipping the fleet with water tube boilers, as they too had problems with the new type of boiler. There were several problems on the HMS Furious , for example a machine failure in 1902 during a high-speed test.

The Arrogant- class cruisers were used in support of the Royal Navy's battle squadrons. The coming into service Kreuzer came to the Channel Squadron (Channel Squadron). The operational readiness of the new cruisers left a lot to be desired. The Arrogant dropped out prematurely during the autumn maneuvers of the fleet in 1899 due to propulsion problems and had to be released to Devonport for repairs. HMS Furious , the second cruiser of the class, was parked by the Canal Squadron in late 1899 to secure transports to the South African theater of war between Gibraltar and Cape Town . In fact, it arrived in Las Palmas on December 8th with the propulsion system no longer operational. There the cruiser was laid up for two months, during which the ship's engineers tried to repair the propulsion system. It was in no way usable in this, nor could it return to England. The rest of the crew helped ships on their way to South Africa to take over coal, water and supplies. At the beginning of February 1900, the repaired Arrogant arrived in Las Palmas and took over the security tasks on the way to South Africa, while the emergency repaired Furious returned home with her at only possible slow speed and was repaired in the Chatham Dockyard.

In 1904 the Arrogant and the Gladiator were in service with the battleship squadron of the Mediterranean Fleet . The Arrogant then came to the Atlantic Fleet with the main base in Gibraltar , where she was assigned to the battle squadrons of the cruisers HMS  Amethyst and HMS Diamond in June 1906 . At the same time the Gladiator in Portsmouth and the Vindictive in Sheerness were in reserve, while the Furious was assigned to the Portsmouth Naval School.

In October 1907 a cutter salvaged the Arrogant from the French barque "Leon XIII", which ran aground on the Irish west coast at Sarsfield Point near Quilty , County Clare , on October 1st. the captain and the last nine men, after Irish fishermen had already salvaged part of the crew. 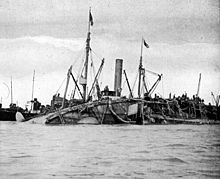 The rescue of the gladiator

The Gladiator sank on April 24, 1908 after colliding with the American liner Saint Paul (1895, 11629 BRT, International Navigation Company ) in the Solent . The cruiser was with a reduced crew on the flyover from Plymouth to Chatham and ran into the Solent in a blizzard. The commander incorrectly assessed the evasive maneuver signaled by the Saint Paul sailing out at 13 knots , dodged to the wrong side and ran the Saint Paul to the bow, which hit the cruiser behind the engine rooms and tore a large hole in it. The gladiator almost managed to run onto Wight Beach before she capsized to one side and lay there. Though only a little over 200 m from the coast, 28 men were killed.
By October of that year, the cruiser managed to lift and bring it to Portsmouth. A repair turned out to be no longer useful and the wreck was sold to the Netherlands for demolition.

In June 1911, the Arrogant retired from active fleet service and became a depot ship for the submarines stationed in Dover . In 1913 the Furious was launched.

The Furious was launched again in 1915 as a barge under the name HMS Forte at the Torpedo School in Portsmouth. The Arrogant remained stationary in Dover during the war. Since June 1911 depot ship for submarines, she became the stationary flagship of the Dover Patrol in 1915 .

Only the Vindictive was activated at the beginning of the war and formed the newly established 9th cruiser squadron under Rear Admiral John de Robeck with the cruisers Europa , Amphitrite , Argonaut , Highflyer and Challenger , which was to relocate to Gibraltar and control the Atlantic off the Iberian Peninsula and North Africa. On August 4, de Robeck left with the first operational Vindictive (as flagship ) and Highflyer Plymouth. Already on the approach to Gibraltar numerous ships were checked and in some cases also confiscated. Amphitrite and Argonaut followed later and finally Europe and Challenger .

In November 1914, received Vindictive a strong radio system and, after Ascension sent to repeat radio signals and contact the Admiralty for against the German East Asia Squadron under Spee sent battlecruiser squadron under Sturdee sure. After the destruction of the German squadron, the Vindictive moved to the South American coast and took over the task of the guard ship at the British coal station near Abrolhos from the liner HMS Canopus in February 1915 . On February 22, she even became the flagship of Admiral Archibald P. Stoddart when the HMS Carnarvon ran aground and had to be repaired. When the German auxiliary cruiser SMS Möve disrupted trade in the spring of 1916 and advanced as far as the South American coast, the old Vindictive was the only cruiser on the station, as the station cruiser HMS Glasgow was overtaken. She was supported in her security tasks by the auxiliary cruisers HMS Macedonia and HMS Orama . In 1917 the Vindictive was then used in the White Sea to secure the supply trips to Russia.

In 1918 the old cruiser was prepared and re-armed in Chatham for the attacks on the German bases in Flanders to become an attack ship on the port of Zeebrugge . She should turn off the German artillery in the port area and put 200 marines ashore. The April 23 attack cost many victims, but was unsuccessful because the Vindictive did not get to the planned location. She returned seriously damaged and was then used as a block ship in the second attack on Ostend on May 9th. The 54-man crew consisted of volunteers from the HMS Brilliant used in the first attack . This attack cost fewer victims, but again not everything went according to plan and the use of the base was only impeded.

The monument to the Vindictive in Ostend

The Vindictive , sunk in Ostend as a block ship , was lifted in April 1920. Part of her bow was erected in the harbor as a memorial and the rest of the cruiser was scrapped.

Her name was carried on from the Hawkins-class cruiser Cavendish, which was completed as an aircraft carrier and which had been renamed Vindictive in June 1918 before completion. The ship was turned back into a cruiser in 1924 and served as a training ship from 1937.

The two cruisers Arrogant and Forte ex Furious , which survived the war as barges , were sold for demolition in 1923. The class's namesake, HMS Arrogant , was the last cruiser of the class to be scrapped at Hughes Bolckow in Blyth .

Whereabouts of the cruiser