The Bärenbrunner Tal belongs to the Dahner Felsenland in the German part of the Wasgau , which is formed by the southern part of the Palatinate Forest ( Rhineland-Palatinate , Germany) and the northern part of the Vosges ( Bas-Rhin and Moselle departments , France). The valley lies within the boundaries of the municipality of Busenberg ( district of Südwestpfalz ).

The Bärenbrunn valley can only be reached via the village of Schindhard , from where it stretches on both sides of the district road 41 over 2.5 km to the northeast; the altitude rises gradually from 210 to 250  m .

The county road ends at the end of the valley. The Bärenbrunnerhof is located there in a basin that is only open to the southwest . This is a historic farm that was laid out from 1712 and is now a listed building. Since 1830 it has been in the possession of the family of the current owners, who run an organic farm there with cattle breeding and an attached restaurant. 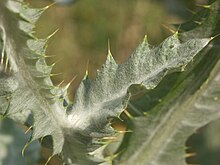 Donkey thistle in the Bärenbrunn valley

Bärenbrunn was a small village in the 14th century at the entrance to the Haberteich in the main valley, the Bärenbrunnertal. The village was probably built around a pilgrimage church and belonged to the Klingenmünster monastery . The inhabitants were serfs and had forced labor to pay. They were referred to as " Michael people ", which is why it can be assumed that the church was dedicated to St. Michael .

In 1389 the monastery gave the village to Count Eckebrecht von Dürckheim , who had his residence in the nearby Drachenfels Castle , “to enjoy” . In return he guaranteed the protection of the monastery and its goods. 1485 came Bärenbrunn temporarily in the possession of the knight Hans von Trotha , the Elector of Sincere Philipp with Berwartstein invested had. During the Reformation , in the 16th century, the inhabitants became temporarily Protestant at the instigation of Eckebrechte, who were now in charge again in Bärenbrunn .

In the Thirty Years' War between 1618 and 1648 Bärenbrunn was totally devastated and was "peopleless"; even Busenberg had only five inhabitants. Resettlement soon followed, but in the Palatinate War of Succession the place was destroyed again by French troops in 1689 . After the French left, people settled again.

1712 gave Philipp Heinrich Eckebrecht of Dürckheim by Erbbestandsbrief the Civil Nicholas Lorch from Bergzabern the fields, meadows and forests of Bärenbrunn for an annual leasehold of 50  guilders . Lorch laid out today's yard and mill.

After the French Revolution had spread to the Electoral Palatinate , the aristocracy's goods were expropriated and auctioned at the beginning of the 19th century. The mill was bought by the miller Jean Ganter for 800 guilders, the farm and the associated land bought by the previous tenant Friedrich Haage for 4000 guilders . Soon afterwards, the farm and mill were transferred to Jakob Rebholz from Merzalben . In 1830 Johannes Guth leased the Bärenbrunnerhof. The Guth family, who later bought the property, have lived there since then.

The climbing area Palatinate Forest includes a large number of climbing rocks made of sandstones from the Buntsandstein , some of which are also on the edge of the Bärenbrunn Valley. They are often visited by sport climbers . The difficulty levels of the climbing routes range from I to XI on the UIAA scale .