The Besselgymnasium Minden is one of the three high schools in the East Westphalian city ​​of Minden .

The Besselschule in Minden was founded in 1896 and opened a year later at Easter as a secondary school in Minden. The expansion to the secondary school from 1904 made it possible to acquire school- leaving certificates for the first time in 1907 .

Initially, the upper secondary school with the Mindener Gymnasium was housed in a school building on Immanuelstrasse built in 1880, which was largely designed by the architect Eduard Heldberg . In 1920 these two schools separated spatially and the grammar school moved out. The Besseloberrealschule, as it was called from 1921 after the astronomer and mathematician Friedrich Wilhelm Bessel , stayed in this building until the move to a new building on Hahler Strasse in 1975. The cathedral school (elementary school) moved into the old building on Immanuelstrasse. At this time, the first co-educational classes were introduced at the school, which was previously only attended by boys. The current location received an extension in 2000. 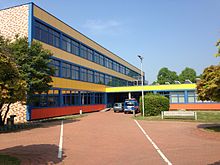 The Besselgymnasium has a long tradition of rowing. From 1939, investments were made in their own boats. Initially located on the pioneer training area in the 1960s, the wheelhouse on the branch canal of the pumping station of the Minden waterway intersection was built.

A sports performance course was set up for the first time at the Besselgymnasium in 1976; In addition to schools in Düsseldorf, Dortmund, Münster and Solingen, the Besselgymnasium has been one of the first five NRW sports schools in North Rhine-Westphalia since the 2008/2009 school year . In addition to traditional rowing , handball , athletics and volleyball are offered as profile sports. On May 28, 2014, a new sports hall was inaugurated, to the financing of which local sponsors made a decisive contribution; with it, the capacity for physical education is considerably expanded.

In addition, the school has a scientific - mathematical profile and a foreign language focus with bilingual (German / English) courses. English , French , Latin and Spanish are taught as foreign languages .

The Bessel Prize is the school's highest award and is awarded annually to pupils who have performed particularly well for the school community.

In 2014 Philipp Baumgard received it, who as the helmsman of the rudder eight achieved an exemplary performance outside of school, he won the gold medal of the Bessel eight in youth training for the Olympics (national competition) and the silver medal at the Junior World Championship in Germany four-man with helmsman.

Besselgymnasium maintains partnerships with Eltham College in England, Lyceum No. 23 in Kaliningrad (Koenigsberg) in Russia, Lycée Jean Bart in Dunkerque (Dunkirk) in France and Broad Run High School in Ashburn (Virginia) in the USA. There are regular student exchanges between the Besselgymnasium and these schools.

The Besselgymnasium cooperates with the Minden-based companies Wago and Follmann as well as the Techniker Krankenkasse . There is also a cooperation with the music school of the city of Minden.

The school community of the Besselgymnasium initiated the construction of a planetary path in 1996, which was realized with sponsor support. It represents the proportions of the solar system in a ratio of 1: 1 billion.

Former students of the Besselgymnasium