Bettbrunn is a former community in the Köschinger Forest and a well-known Catholic pilgrimage site . Today the village, together with Kasing, is one of the three districts of Markt Kösching in the Upper Bavarian district of Eichstätt and is located northeast of Ingolstadt . The place had 260 inhabitants on June 30, 2008. The built-up area is 17 hectares , the total area of ​​the former municipality and today's district 317.29 hectares. 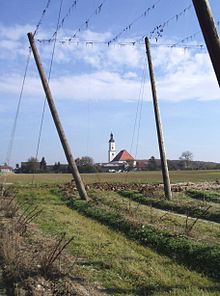 The village of Bettbrunn is located about eight kilometers northeast of the main town of Kösching on a foothill of the Franconian Alb in the middle of the Kösching Forest.

It was originally called Vehebrunn or Pfebrunn ( draw well ). From 1378 the place is attested as a Bet-Brunn because of the pilgrimage .

Vehbrunn or Pfebrunn was first mentioned in a document in 1125 in connection with a miracle of the host. The current place name Bettbrunn appeared for the first time in 1378. In the late Middle Ages and early modern times, Bettbrunn developed into an important place of pilgrimage. In 1690 an Augustinian monastery was founded in the village to look after the pilgrims. As a result of secularization , the monastery was dissolved in 1803 and the convent buildings demolished; pilgrimage was forbidden.

In 1839 the place came to the newly formed administrative district of Upper Palatinate in the Riedenburg district court . The pilgrimage was revived after 1860 and continues to this day.

The incorporation to Kösching took place on July 1, 1972 in the course of the municipal reform . Since then, Bettbrunn has been part of the Upper Bavaria administrative region .

Bettbrunn became famous for the oldest host pilgrimage in Bavaria, which dates back to 1125. Even today, around 13,500 pilgrims make the pilgrimage to Bettbrunn every year to call on the holiest Salvator Mundi von Bettbrunn. Hence the nickname of the place in the area: Sejvoda , derived from Salvator.

Bettbrunn is a stop on the East Bavarian Way of St. James , which , coming from Regensburg and Weltenburg Abbey , crosses the Köschinger Forest and continues to Eichstätt and Donauwörth .

From the monastery Bettbrunn today only the sanctuary has been preserved.