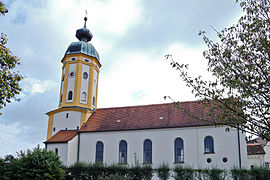 Biburg is a parish village with approx. 1350 inhabitants in the Swabian district of Augsburg . Since the regional reform of May 1, 1978 Biburg is part of the municipality of the market Diedorf . The village lies at an altitude of 506  m above sea level. NN .

Biburg, first mentioned in 1178, was already in the hands of the Augsburg Collegiate Foundation of St. Moritz as an episcopal fief . Probably the first endowments of the collegiate monastery were located along the Biberbächlein, which gradually expanded its property to such an extent that in 1643 it encompassed almost the entire village. In the middle of the 18th century, St. Moriz in Biburg owned 52 fireplaces with the lower court and street court .

The Biburger Mühle an der Schmutter (also called Schlipsheimer Mühle or Kreppenmühle) was also mentioned as early as 1178. In the early Middle Ages, brown iron ore was extracted in funnel pits in the forests north of the village . The location on the Augsburg - Günzburg - Ulm road (customs in transit, postal services) brought the village economic advantages. That is why Biburg was formerly the largest village among the localities that now belong to the unified community of Diedorf.

A margravial Burgau bailiff sat in his own bailiff's or customs and rifle house , who was also a customs collector. On January 4, 1516, Emperor Maximilian I passed through. In the final battle of the Thirty Years' War on May 17, 1648 Battle of Zusmarshausen called flickered in Biburg once the fighting between from Zusmarshausen Augsburg retreating Imperial - Bavarian army and the nachstoßenden Swedish - French army. Imperial Field Marshal Count Peter Melander von Holzappel is said to have been fatally wounded between Biburg and Horgau .

The Biburger Schlösschen, in which the state forestry office is now located, belonged to the Augsburg financier Thomas Claudius Carli in the second half of the 18th century . The bibliographer and historian Georg Wilhelm Zapf (1747 to 1810), who was important for Augsburg history, lived there for a time . An old construction has been preserved in the St. Andreas church in Biburg , with the choir located on the ground floor of the tower. In 1740, during the service there, there was a bloody dispute between Burgauian and foundation subjects about the church seating. A Bräustatt and three other inns used to get their income from the numerous carters and travelers. After the opening of the Augsburg – Ulm railway line in 1853, through traffic decreased. In 1881 the Biburg volunteer fire brigade was founded.

The name of the community was originally "Biber" or "Biberin" and goes back to the little beaver brook that rises in the corridor of the community. The assumption that the place name goes back to a castle or ramparts cannot be substantiated by documentary notes or archaeological finds.

Coat of arms and flag of the formerly independent municipality

Blazon: In blue a continuous silver St. Andrew's cross, covered with a gold shield, inside a narrow blue shield main wave bar above a green three-mountain.

The local historical development is symbolized with the heart shield. The narrow wavy bar stands for the Biberbächlein, which gave the place its name, and was placed on the St. Moritz coat of arms shown in the heart shield. The St. Andrew's Cross is the attribute of St. Andreas, who is the patron of the parish church.

Districts of the market Diedorf