As a beer boy (also beer scandal , beer duel , beer mensorship or drinking mensorship ; in Switzerland also called Jünger ) is a student custom of competitively drinking beer , as it is still practiced today in student associations . 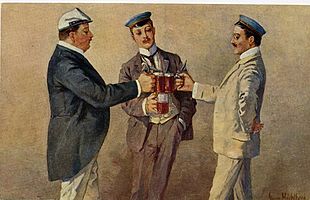 Beer duel by Georg Mühlberg (1863–1925): the opponents are on the left and right, the referee in the middle

The term "beer boy" originated in the first half of the 19th century when the corps in their senior citizens' convents (SC) laid down the rules of student coexistence in SC comments . All questions of satisfaction and the student duel were also settled here. Even the severity of insults was precisely defined and how to react to them, sometimes with the naked weapon. In most cases, the slightest insult was the expression "You are a stupid boy!"

When, over the course of time, the conviction developed that a student had to defend his honor at least once with the naked weapon, even if he was not involved in a dispute, a standard insult developed, which is no longer an attack on the Honor was considered, but only as an invitation to fencing. That standard insult was the "stupid boy".

The rules and formalisms of the comments were soon parodied at the beer table. The SC comment became the beer comment , the “court of honor” became the “beer court”, instead of the “SC disreputation ” or “Verschiss” one came to the “Bierverschiss”, the scale became the “Biermensur”, the "stupid boy" became the "beer boy".

In the course of time, other corporations adopted the custom as a parody of the customs of corps students. These are usually much less serious about the beer mensorship.

Gustav Schwab's "Thunderstorm Song", known at the time, was repositioned by Kurt Luch. In the 2nd stanza of the "Siphon" it says:

Leibfuchs says: Tomorrow is
morning pint day,
How I like to drink again,
How do I want to spin and drink the rest, Drinking the
young beer is a feast for me -
I am fond of the beer boy -
Do you hear how the siphon growls?

Such single chants were interrupted by so-called loafing songs, which the senior started:

Drinking was the very best
in Christ's time.

The Königsberg beer routine was well known , the drinking comment in Albertina's boyhood custom of 1824. Friedrich Nietzsche , fraternity member in Bonn , detested the “beer materialism” of his fellow students .

The status of the beer boy differs with the different connection types. In contrast to other student associations, Corps students maintain a simplified practice that is now spreading more and more. So it is unthinkable that a younger or even a fox should offer the older a beer boy. For corps students, the beer boy is an expression of appreciation.

If a fraternity student is challenged with the word “beer boy”, he replies with the word “hangs” to indicate that he has accepted. Especially Swiss student associations still have the obligation to drink. The maximum time to kill the beer boy is five beer minutes . The beer boy is held in different variants, for example - depending on your choice - in the presence or absence of a referee or beer court . This decision-making body can set further conditions for victory, for example "Five friendly words to the opponent after weaning." Sometimes a two-line is required before drinking. Prostsagen is obligatory . Often seconds are also included. The winner is whoever is the first to completely drink his vessel and put it down vertically. In the case of tight decisions, the amount of spilled beer and the remains in the beer glass is assessed. If a decision is still not possible, another beer boy can be appointed to make a decision.

"The stupidest glue you crawl on is a drunk beer dish."

According to the “Kiel Comment”, the beer boy waives impartiality, seconds and ritual execution. The triggering is the start signal. In this simplified variant, hanging a beer boy is often followed by a replica of "hanging twice", "hanging four times", etc. The number of beers should always be doubled, a "hanging three times" is considered " buxy ". In this simplified version, the glasses hold 0.2 or 0.3 liters. But larger glasses can also be used, up to and including a carafe (a 1.8 l Luminarc octagon). In addition to beer boys, there are also Weinlümmel, champagne girls and all sorts of other types of -lümmel / -mädel, which are based on personal preference. It is not absolutely necessary that something drinkable is used for the competition. In principle, all food and drinks used in the contests except beer are given the ending "-lümmel".

As explained in the Kiel Commentary, a simple beer boy can be rushed with the reply “hangs twice” (with some connections “Pabst”) instead of the answer “hangs”. The previous one, who offered the beer boy, can now rush again with a "hang fourfold".

On more or less special occasions, members of student associations , but also of school associations , drink so-called relay races, the team version of the beer boy.

In a relay, two (if possible equally strong) groups stand opposite each other and drink their beer one after the other "on the fly", ie in one go. As soon as the drinker's glass touches the table, the next person on the relay takes his glass in his hand and drinks it. The last "link" of a relay calls "through" after being dropped. If both groups are equally fast ( a tempo ital. "Simultaneously"), the relay should be repeated.

Before a relay, both sides are “counted” as in roll call . The last one adds a “through!”.

Telecommunications have made telephones possible since the 1970s . Here two groups in different cities drink from each other, with the announcement "through" being transmitted by phone. Spontaneous reviews of the questioned outcome often follow ad hoc . This is how some friendly connections cultivate their relationships.

A novelty of the Internet age is the video relay, with which the exit can be checked via instant messaging (e.g. Skype ). In 2014 , the customary drinking game beer nomination spread via Facebook .