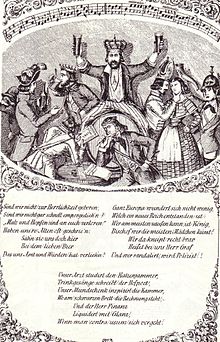 Are we not born to glory ( Albertina songbook )

Beer State - Beer Duchy; Beer Kingdom - was a student carnival game that could stretch over several days. The custom only lives in Regensburg at the Corps Franconia Jena.

The theme was the parody of the manorial structures of the Holy Roman Empire , the aristocracy and the clergy . The main places of these customs were Jena and Leipzig , but also Breslau . Thematically related were also more widespread, simpler, shorter drinking games , which were known under the names Fürst von Thoren or Papstspiel and are probably to be regarded as the forerunners of the beer states . The first drinking experiences seem to have existed as early as the 16th century. These games are the subject of numerous representations and literary mentions, especially from the final phase of the first half of the 19th century. Typical of these events was the combination of carnivalesque parody, cabaret -literarischem lecture ( taunts ) and excessive alcohol consumption. From today's perspective, most of these events by far exceeded the limits of good taste and were an example of the unbridled morals of student culture up until the beginning of the 19th century. After the Second World War , there were attempts to revive at least the Jenens tradition of the beer duchies in West Germany, which failed, with the exception of the Corps Franconia Jena , which had moved to Regensburg . Today these events are largely forgotten, and there is only one beer state left, that of Henneberg-Wöllnitz , whose ruler is found annually in Regensburg under the aegis of the Jenenser Franks. Elsewhere it has been forgotten or is the subject of student historical treatises.

Bierkönig is also the name given to each part of a tour at Quodlibet , a traditional card game. 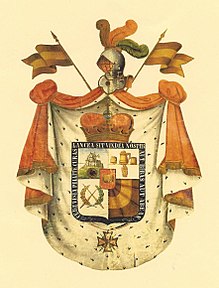 Beer duchies have come down to us as larger, sometimes multi-day events, primarily from Jena , Leipzig and Breslau . Jenenser students drove from the city to the excursion villages in the area (so-called beer villages), such as Lichtenhain , Ziegenhain , Ammerbach or Wöllnitz . The beer duchy of Lichtenhain of the Corps Thuringia Jena , which was always headed by a duke named "Tus", was famous . According to tradition, the name comes from the first "Duke", whose real first name was "Justus". The Corps Franconia Jena has been celebrating the Court Day since March 3, 1823, which in Jenens times was celebrated with a large parade through Jena. Any honorable man could become a member of the beer state, so some old farmers from Wöllnitz were highly respected knights. The ruler of the beer state zu Henneberg-Wöllnitz is called "Popp". He is the unrestricted ruler of the beer comment and decides on the right interpretation of the constantly changing beer comment in a beer court.

Based on the Jenenser model, the Corps Lusatia Leipzig celebrated the Zschocher beer county from 1841–1844 in a village near Leipzig . On the illustrated lithograph from 1847, the theologian and later politician Friedrich Heinrich Immisch resides as Count Strolch II . The Corps Marchia Berlin drove a similar mummery with its beer kingdom of Flanders and Brabant , with which it camouflaged itself during the pre-March prohibition period.

Many of these games worked in such a way that social roles were distributed among those involved, with various rituals then being played out that regularly had to do with drinking beer. The higher the social status of the respective role, the more the owner of this role had to drink. The beer Duke held as a throne speech and distributed beer orders . A court jester joked about those involved. A bishop reprimanded those present about their sins. Violations of the protocol were punished with beer fines. Sometimes the beer night was imposed.

In stanzas 2 and 3 of the traditional student song Are We Not Born To Glory , the concept of the beer state is elaborated:

All of Europe is amazed
What a new empire has come into being.
Who can drink the most is king
Bishop who kisses the most girls.
Anyone who picks up really well is called Herr Graf;
Anyone who riot there becomes a police officer.

Our doctor studies the shame
The court poet writes drinking songs;
The court cupbearer inspects the chamber,
Where the bill is on the notice board;
And Herr Finanz liquidated with splendor,
If you go against yourself.
Text and melody: Hermann Wollheim 1835

"What a quality enhances man" - Pope game and beer king

An earlier version were games in which the social hierarchy was determined by a type of drinking competition. Whoever tolerated the most achieved the highest honors. Whereby it could also be common that the “Pope”, ie the winner, was deliberately made to vomit (“Pope”) or unconscious at the end, for example by being smoked with tobacco smoke . The first description of a papal game dates back to 1644. A reminder of this game has survived to this day in the language of the fraternity students. The cuspidor is still called “Pabst” by fraternity students today . A reference to this game is provided by Goethe in his drama Faust I in the scene “ Auerbachs Keller in Leipzig ”. Goethe had studied law here in the 1760s and was very familiar with contemporary student customs. The scene depicts a company of students who are bored in the inn and looking for entertainment:

B rande r. A nasty song! Pooh! a political song!
A sorry song! Thank God every morning
That you don't need to take care of the Roman Empire!
At least I think it is ample profit
That I'm not emperor or chancellor.
But we need not lack a head either;
We want to choose a Pope.
You know what a quality
Makes the difference, increases the man.
(Johann Wolfgang von Goethe, Faust, The tragedy first part, verse 2092-2100)

With “quality”, which is decisive for the increase in men, the factor “drinkability” is clearly indicated. 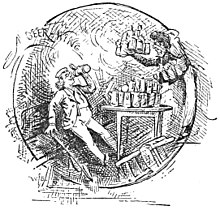 The American writer and satirist Mark Twain also reports something similar from 1878 in his work A Tramp Abroad , in which he describes experiences at the Heidelberg Senior Citizens' Convention . On this occasion, he also tells of the custom of choosing a “Beer King”.

"Kneips are held, now and then, to celebrate great occasions, like the election of a beer king, for instance. The solemnity is simple; the five corps assemble at night, and at a signal they all fall loading themselves with beer, out of pint-mugs, as fast as possible, and each man keeps his own count - usually by laying aside a lucifer match for each mug he empties .
The election is soon decided. When the candidates can hold no more, a count is instituted and the one who has drank the greatest number of pints is proclaimed king. I was told that the last beer king elected by the corps - or by his own capabilities - emptied his mug seventy-five times. No stomach could hold all that quantity at one time, of course - but there are ways of frequently creating a vacuum, which those who have been much at sea will understand. "

From this illustration, however, it becomes clear that Mark Twain did not experience such a pub himself. Although he was invited by the Corps to a class day , where he was allowed to experience sharp scales , he probably did not know a pub by sight. At that time, the sophisticated pub etiquette and the complex beer comment of the Corps were already developing , so that such an event should not have been limited to a drinking competition. The author is more likely to have been exposed to the debauchery of his informants.

The rather simple game “Fürst von Thoren” (also: “Fürst von Thorn”) has many representations and a song that was sung when it was performed. Obviously, the Prince of Thoren used to enjoy wine. The game works in principle by singing the song and drinking in turns of the individual participants with the previously determined "prince", whose role was passed on in the course of the game. The respective “prince” sat on a “throne”, usually a chair placed on the table. Student pubs from the first half of the 19th century often show one of the drinkers sitting on a chair on the table, which indicates the popularity of this game.

One: I am the Prince of Thoren,
Chosen to drink.
The rest of you have appeared.
To serve me like a prince.

A ll: To await your grace
With wine of all kinds,
To serve you like a prince,
we appeared here

The "Prince of Thoren" is considered to be the origin of the later developed concepts of the "beer states", so to speak as a primitive archetype. It is documented as early as 1697 . The song appeared in print for the first time in 1815, in the Leipziger Kommersbuch by Carl Hinkel . 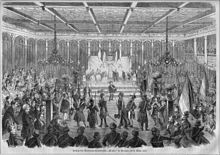 Court day of the Corps Silesia 1852 in Breslau