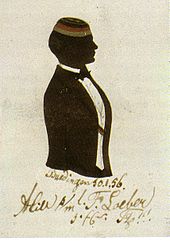 The allegedly oldest continuously existing German school association is the Absolvia Bayreuth from 1833 in the Franconian Absolven-Convent (FAC). The oldest student association in Germany, which still exists today, but was dissolved and re-established in the course of history, is the PV Markomannia 1824 zu Rastatt , whose founding year 1824 has only been passed on orally. It belongs to the Pennäler Kartell Baden (PKB).

In the Grand Duchy of Hesse , pennale offshoots of the Gießen Corps ( Teutonia , Hassia, Starkenburgia) at the grammar schools in Gießen, Darmstadt and Büdingen were created in the 1840s as a special form , which fought sharp gauges until the second half of the 19th century and were the most important field of recruitment of the University corps formed.

National socialism "demanded Reich Youth Leader " Baldur von Schirach , the DC circuit of the Youth Leagues: Resolution, self-dissolution, conversion and acquisition of other youth organizations and "How the Nazi Party is now the only party, the HJ must be the only youth organization." By prohibiting, corporations , The Hitler Youth grew to almost four million members by 1935. The office of the Reich Youth Leader became a "Supreme Reich Authority", in which state youth policy and Hitler Youth leadership were united. Anyone who did not join the Hitler Youth was considered an outsider. Officials were required to send their children to the Hitler Youth. After the time of National Socialism, only a few student associations were re-established in Germany.

In general Pennäler Ring (APR) took place on 16./17. June 1990 in Eisenach fraternized student associations, mainly from northern and central Germany. It currently comprises 13 corporations. The national-liberal APR is committed to the goals and ideals of the original fraternity, whose principles are maintained and disseminated. The member corporations of the APR are colored and stand by the Lebensbund and Convent principles. With the Austrian Pennäler Ring (ÖPR) there has been a common association principle since 1992.
Further, more regionally shaped associations of student associations are the Franconian Graduate Convent (FAC) , founded in Erlangen on November 1, 1953, with eight member associations, and the Pennälerkartell Baden (PKB) , which came into being in June 1973 and today unites nine member associations.

In addition, the Passauer Seniors Convent (PSC), which was founded on August 21, 1921, brought together other student associations in a cartel.

In Austria, many student associations - such as university corporations - refer to themselves as student associations . Traditionally, the pupils of the higher education institutions were (and are) called students. This was due, among other things, to the fact that you usually had to leave your home town to attend a grammar school, as there were only a few central schools. Today there are around 240 active student associations in Austria.

The corporation federation with the largest number of members is located in Austria. It is an association of student associations: the Mittelschüler-Kartell-Verband (MKV) of the Catholic, colored student associations. The oldest corporation in the MKV is Teutonia Innsbruck , which was founded on November 22, 1876 despite the so-called ban on coalitions for middle school students. The MKV has around 163 corporations, which in turn have around 20,000 members (active and old men). In addition to the MKV, there is also the Association of Colored Girls VFM in Austria , which is the female counterpart to the MKV. In Austria, however, there are also numerous non-union student associations of both sexes, all of which are members of the EkV .

Striking student associations are mostly based on certain student university associations such as corps and fraternities and use their names, usually with the addition " Pennal " instead of the " academic " of the university associations. There are Pennale Corps (pC) or Pennale Fraternities (pB) . The oldest known student association at all was the Pennale fraternity Teutonia , which existed in Teschen (then Austrian Silesia) from 1817-1819 . Most of the Pennal connections are organized in the Austrian Pennälen Ring (ÖPR). It also includes the pcB Allemannia et Nibelungia , the oldest still existing student association in Austria , founded in Graz on October 24, 1860. The ÖPR has around 60 corporations.

In addition, there was the Seniors Convent pennaler Landsmannschaften (SCPL), a non-beating and Catholic-monarchist association that cooperated with the Bund KÖL (with the student counterpart Catholic Austrian Middle Schools Country Team (KÖML or K.Ö.ML)), as well as various non-union pennale semesters - and holiday connections . 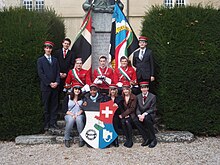 The Swiss Student Association (StV) has approx. 23 active middle school connections (out of a total of 57 connections) and another approx. 10 high school connections (GV), which currently only exist as old men’s association (AHV). The GV of the StV are summarized in the Gymnasia. The StV was founded on August 31, 1841. The first four sections (connections) of the StV were created in 1843. These are (in chronological order) the sections Freiburg im Üechtland (today GV Zähringia ), Schwyz ( GV Suitia ), Lucerne ( AV Semper Fidelis ) (originally GV until 2006/07) and Freiburg im Breisgau (AV Helvetia Friburgensis).

Middle school connections can also be traditionally connected with a middle school (e.g. high school). Examples of this are the Scaphusia , the Thurgovia and the Vitodurania (Eastern Swiss Cartel) or the Wengia in Solothurn. Today there are still connections to secondary schools in Basel, Langenthal, Aarau, Olten, Frauenfeld, Schaffhausen, Solothurn , Burgdorf, Winterthur, St. Gallen, Stans, Schwyz and other cities. There are also connections to boarding schools such as Schiers, Engelberg, Einsiedeln etc. In recent years, connection-like student organizations have also emerged at schools other than grammar schools.

The following important information is missing from this article or section:
"politically active" - ​​in what way? What views do these associations represent? What are you doing politically?
Help Wikipedia by researching and pasting it .

In Flanders there had been Catholic student associations since the end of the 19th century and during the interwar period. In 1903 they organized themselves in the Algemeen Katholiek Vlaams Student Union (AKVS), which defined itself as non-colored and politically and religiously active. Because of the Flemish activism before and during the Second World War , no re-establishment was possible after the war.

The Nationalistic Jong Student Association (NJSV) has existed since 1978 and currently has four sections. He is independent, but is close to the Flemish Nationalist Nationalist Student Union (NSV). In addition, the Katholiek Vlaams Scholierenverbond (KVSV) has existed since 2008 with currently five sections as the local association of the Katholiek Vlaams Hoogstudentenverbond (KVHV). Both associations are colored, politically active and accept men and women.

With year of foundation and number of connections