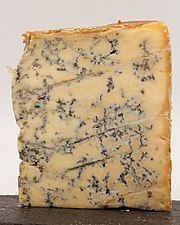 Blue Stilton or simply Stilton is an English blue cheese made from pasteurized cow's milk with at least 48–55% fat in the dry matter .

The Stilton is considered the king of cheeses in England and has a long tradition. It is named after the village of Stilton in the central English county of Cambridgeshire on the Great North Road stagecoach line . Cooper Thornhill ran the Bell Inn there in the 18th century . In 1730, while visiting a small farm near Melton Mowbray in the county of Leicestershire , Thornhill discovered a very special blue cheese, which he so liked that he signed a contract with the farmer Frances Pawlett, which gave the Bell Inn the marketing rights for the cheese, hereinafter called Blue Stilton exclusively secured. A short time later, entire truckloads of the cheese were being distributed via the Inn , because the main trade route between London and the north of England was via Stilton, so that Thornhill was able to promote and sell the cheese optimally and the Stilton's special reputation spread very quickly throughout the country .

Today the Stilton is cheesed by six dairies in the counties of Leicestershire, Derbyshire and Nottinghamshire . Stilton is protected as a trademark of the Stilton Cheesemakers' Association (SCMA) , to which five of the producers belong, and since 1996 the cheese has enjoyed the status of a protected designation of origin / PDO in the entire EU legal area . In the meantime, even the smallest producer of raw milk has switched to pasteurized milk.

Today, a total of over a million Stilton wheels are produced each year, around a tenth of which are exported to around 40 countries worldwide.

To make 8 kg Stilton cheese, you need 78 liters of milk. The process used here is similar to that used for cheddar : first, the milk is thickened using a starter culture and then rennet is added. As soon as the jelly has set, it is cut into long ribbons or cubes with a cheese harp . After the break has rested for a while, be - - unlike the cheddar blue mold cultures ( Penicillium roqueforti added). Then the curd is poured into large draining basins, where it remains for 24 hours, until it is first broken into blocks and then chopped by hand to apple size. As soon as the whey has drained off, the curd is chopped up and salted, whereby the salt must be distributed as evenly as possible. Then the curd is filled into round shapes and turned several times until it comes out of the shape. It can now be brought to the cheese store to mature, where it is pricked two or three times during the three-month ripening period, i.e. pierced with long stainless steel needles so that oxygen can get inside and stimulate mold growth. During this time the characteristic brown bark begins to form. Before being sold, the large, cylindrical loaves are sorted and classified by means of test bores. Only flawless goods can be traded as Blue Stilton , the rest is sold as Blue Cheese . 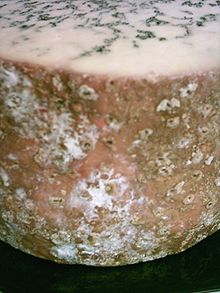 Blue Stilton, the puncture holes of the piki needles can be seen very well in the bark

The Stilton has a thick, wrinkled-wrinkled, somewhat scaly bark of a gray-brown color with hints of white mold. In the young style, the dough is light ivory with a subtle blue marbling and still quite crumbly, with age it becomes softer and darker, whereby the fungal network becomes more and more pronounced from the center to the edge and turns bright blue-green. The cheese has a pronounced nutty aroma and tastes mild and pure, fruity and spicy, and more piquant as it ripens. It is a typical seasonal cheese; the best Stilton is produced in summer and goes on sale in late autumn and in the winter months. Sometimes it is sold too fresh and is then hard, white, lime-like and tastes slightly sour. If, on the other hand, the dough is covered with brown smear, this indicates overaging.

The cheese makes a small meal with bread and mixed pickles . In his home country it is often served with celery . It also looks good as an ingredient in salads or as part of a filling for baked potatoes or mushrooms . It melts well in soups ; in England, for example, it is added to celery soups with cream . It is just as suitable for sauces , and together with butter , brandy and a little nutmeg , it makes a seasoning paste for grilled steaks and chops . After all, it is also a dessert cheese that is traditionally served in England with port wine or even poured over it.To this end, a little port wine is poured into a small recess in the cheese wheel and a creamy Stilton port wine paste is worked out with a spoon, which is eaten with crackers . The Stilton also tastes very good with a smoky whiskey.