Blumfeld is a German-speaking Hamburg rock band . She counted from 1990 until its dissolution in 2007 the most important representatives of style Hamburg School and is considered one of the most influential and successful bands of the German indie - scene .

Blumfeld was founded in the spring of 1990 by members of the disbanded bands "Der Schwarze Kanal" and "Bienenjäger". The band is after the main character of a short story by Franz Kafka named ( Blumfeld, an elderly bachelor ) .

In January 2007 Blumfeld announced that singer Jochen Distelmeyer had decided, in consultation with the other members, to break up the band. Before they split up, the band went on a farewell tour in April and May 2007. Her last concert took place on May 25, 2007 in her hometown Hamburg.

Jochen Distelmeyer announced the start of a solo career in July 2009, his solo debut Heavy was released on September 25, 2009.

For the 20th anniversary of the plate L'état et moi , Blumfeld went on tour in August / September 2014 with the original line-up.

As part of the Favorite Record Festival, Blumfeld performed with the original line-up and additionally with Tobias Levin on the second guitar and Daniel Florey on the keyboard and third guitar on December 16, 2017 in Düsseldorf. On February 15, 2018, the band announced that Jochen Distelmeyer was going on a "Love Riots Revue Tour" with Eike Bohlken, Andre Rattay and Tobias Levin as guest guitarist in 2018. It remains unclear whether the band will release new material again.

Their sound, which was originally strongly influenced by guitar feedback, changed to a more pop-oriented sound after the band was changed in the mid-1990s .

The most important feature are the nested German texts, some of which are performed by the singer Jochen Distelmeyer in spoken chanting, which use visual language to link their own emotional worlds with social criticism. Not least because of its elaborate texts, Blumfeld was seen for a long time as a model intellectual band, which only made simpler messages accessible to a wider audience with the last few publications.

Blumfeld's music is characterized by a deep engagement with the social environment. The texts often focus on the difficulties of couple relationships and people as part of a rigid consumer society. Fears, depression, insecurity, disorientation, on the other hand resistance and protest against society and again and again love as the central motif are important terms that are thematized and worked on in Distelmeyer's texts. The sometimes dark and melancholy coloring of her music leads the listener to suspect a pessimistic attitude.

It was never a question for Distelmeyer to write the band's expressive lyrics in a language other than German. However, Blumfeld has decidedly refused to take part in projects such as quotas for German-language music on the radio or the targeted strengthening of a “new German self-confidence” through German-language music.

After the dissolution, a number of appreciations appeared. In the Junge Welt , Christof Meueler placed Blumfeld in a row of the “large West German protest bands ” with clay stones and broken colors . Die Welt honors Blumfeld as "one of the most influential German pop bands of the past few years", who quickly became successful with "their edgy, energetic music and their headstrong and political lyrics", but also did not want to be "pigeonholed [...]". In the opinion of many critics, Distelmeyer "created works of art with titles such as" Gray Clouds "," Dictatorship of the Adapted "or" Illness as a Path "that go far beyond popular pop songs." Ingar Solty describes Blumfeld on Friday as the "left-wing intellectuals ." of rock music in Germany "and certifies Distelmeyer" an expressionistic-poetic language that will remain unmatched in pop culture in the long run ". Solty interprets the "shallower sounds" on the albums Old Nobody and Testament der Angst and the focus on a wider audience in such a way that Blumfeld took on "responsibility for public thinking" and "faced the dialogical pedagogy of organic intellectuals in the sense of Gramscis ". Bertrand Klimmek says in Jungle World that Blumfeld has an exceptional position because no other band would have been “taken seriously” if they “allowed themselves to play Schlager all at once”. 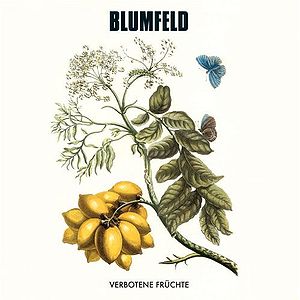