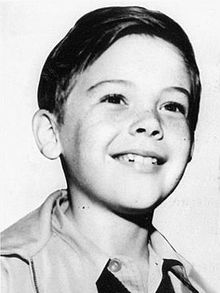 Bobby Driscoll was born Robert Cletus Driscoll in Cedar Rapids , Iowa , on March 3, 1937 , the only child of Cletus Driscoll, an insulation salesman, and Isabell Kretz Driscoll, a teacher. A few months after his birth, the family moved to nearby Des Moines , where they stayed until early 1943. When a doctor advised Cletus to relocate to milder California because of his work-related lung problems, the family settled in the Los Angeles area.

Bobby Driscoll's hairdresser was impressed by the boy's manner and repeatedly urged his parents to try to get him to the film. The occasional schauspielernde son of the barber finally persuaded him to an audition with his agent at Metro-Goldwyn-Mayer for a mini role in the family drama The Little Angel (Lost Angel) , in which the small just emerging Margaret O'Brien starring played. Driscoll was so convincing in his short film debut that 20th Century Fox signed him to the role of little Al Sullivan, the youngest of the five historical Sullivan brothers , in the 1944 World War I drama Five Heroes (The Fighting Sullivans) .

Because of the naturalness of his playing and his special talent for learning texts and dialogues by heart at this age, he was soon celebrated as a new child prodigy in Hollywood and passed around among the big studios. He received film roles in, for example, Der Sonntagsgast (Sunday Dinner For A Soldier, 1944), The Big Bonanza (1944) and in the semi-historical comedy So Goes My Love with Don Ameche and Myrna Loy (1946). He also had a number of small appearances in films like Identity Unkown (1945) and Mrs. Susie Slagel's , today and every day (From This Day Forward) and in the World War II spy thriller OSS with Alan Ladd in the title role.

Walt Disney personally signed him in 1946 for the role of little Johnny in Uncle Remus' Wonderland (Song Of The South) as the first real-life actor in a Disney film. With this film, a combination of real film and animation, Driscoll became the new, critically acclaimed child star of his time alongside his child partner Luana Patten . The US press named them Walt Disney's "Sweetheart Team". The two had with a champion to fall in love ( So Dear To My Heart ) another big hit movie on the side of the singing bards Burl Ives and the screen legend Beulah Bondi . This film and in 1949 premiered RKO production The Window ( The Window ), which on-crime classic The Boy Who Cried Murder by Cornell Woolrich based from 1947, brought the boy in March 1950 the Oscar ( Academy Juvenile Award ) as best child actor of 1949. The Window was a “low-budget film”, but thanks to Driscoll's portrayal of the imaginative, little braggart who no one wants to believe that he had seen a real murder, it brought back many times its production costs.

Before that joined Driscoll in the musical Eddie Cantor -Komödie If You Knew Susie of 1948, in which he also the first time next to the former Little-Rascals played -Star Margaret Kerry, with whom he a few years later in Peter Pan collaborated again should . For his portrayal of Jim Hawkins on the side of the British acting legend Robert Newton 1950 in Walt Disney's version of Robert Louis Stevenson -Klassikers Treasure Island ( Treasure Iceland ), he received a star on the Hollywood Walk of Fame (1560 Vine Street).

Further planned large film projects were not realized or otherwise occupied. Walt Disney had intended him to be Tom Sawyer , but when he was the right age for the role, he ran into film rights issues. Then he should be next to Robert Newton as brother Tuck, a fictional companion of Robin Hood , according to other reports Robin Hood as a child (in a kind of prologue to the actual story) in the 1952 Disney classic Robin Hood and his daring journeymen or Robin Hood, Rebel des König ( The Story Of Robin Hood And His Merry Men ) play, which was then produced with a different cast and plot.

On the basis of his second long-term contract with Disney Studios, Driscoll was loaned to Horizon Pictures in 1950 for the double role of Josh / Danny Reed in When I Grow Up (1951). In addition to his two guest appearances on Walt Disney's first TV Christmas shows One Hour In Wonderland 1950 and The Walt Disney Christmas Show from 1951, he voiced Goofy Jr. in the two cartoon shorts Fathers Are People and Father's Lion in 1951 and 1952 . In 1952 he played “Bibi” Bonnard, the actual protagonist in Richard Fleischer's My Son Discovers Love (The Happy Time).

Finally, Driscoll had his last major global success alongside Kathryn Beaumont (in the role of Wendy Darling) as the model and voice of Peter Pan in the Disney film Peter Pan, which was produced between 1949 and 1951 but only premiered in February 1953 .

Over time, Bobby Driscoll began to no longer fit into the roles that made him a Disney star. At the end of March 1953, his last long-term contract, concluded in 1949 with Disney Studios, which ended in 1956, was terminated prematurely shortly after the premiere of Peter Pan . Now detached from the box office magnet Disney, the other Hollywood studios were no longer particularly interested in the boy. In addition, he had reached puberty and developed severe acne , for which he had to use special make-up in order to at least get attractive roles while watching television.

In addition to his work on screen and on television, Bobby Driscoll also appeared in a number of early US family radio plays from 1948 to 1957, which included a radio version of Treasure Island in January 1951 and a radio play version of the Peter Pan included. And in 1954, he won another Milky Way Gold Star Award in a Parent's Magazine national election for his television and radio work.

His parents took him from the Hollywood Professional School , which was specially created for artistically gifted children and young people like him. Instead, they sent him to Westwood University Public High School , where his previous fame was more of an obstacle than an advantage. Envy and teasing were almost the order of the day, and he was the constant target of malicious remarks from his classmates. He eventually made friends outside the school yard and in the poorer areas of Los Angeles, which could have led him to his first experiments with drugs. Driscoll later commented on that time: “The other guys didn't accept me. They pretended I wasn't there. I tried desperately to be one of the group. When they refused me, I hit back, became rebellious and conceited - and yet I was just scared the whole time. "

Driscoll developed a drug addiction until he started using heroin . His bank account, which was still full, made this easier for him. In 1956 he was arrested for possession of marijuana, but the trial was put down. Driscoll ran away with his young friend Marilyn Jean Rush (on various occasions incorrectly spelled “Brush”) to Mexico in December 1956 to get married. After playing hide and seek for three months, they returned to Los Angeles and officially remarried in early March 1957. Bobby Driscoll and Marilyn Jean Rush had three children together. In 1959 they separated when his wife found out about his drug addiction; In 1960 the divorce took place.

Driscoll tried to break away from his image as a child star. He now used his maiden name "Robert". He was able to continue his television career more or less successfully until 1960. During this time he managed to get two last film roles. 1955 on the side of Cornell Wilde in The Scarlet rock (The Scarlet Coat) and 1958 next to Mark Damon and Connie Stevens in the low-budget strip The Party Crashers , in which he played a teenager who in the fight for recognition and for his Girlfriend joins his rival's criminal ventures. The reviews for this film - including him - were very benevolent.

After that he got his life less and less under control. Further encounters with the law resulted in a fall of 1961 conviction that took him to the Chino California State Reformatory Drug Clinic . When he was released as healthy in the spring of 1962, he would have liked to try a comeback, but was turned down by the film studios because of his criminal record as a drug addict. "I was carried on a silk pillow ... and then thrown in the trash." , Driscoll made a bitter summary of his career.

In 1965, after his probation period expired, Robert Driscoll decided to move to New York in the hope of starting a new career and a new life on Broadway . But nobody wanted to hire him here either. His reputation had already preceded him.

In Andy Warhol 's so-called “Greenwich Village Art Community” - The Factory - Driscoll began to think again about his artistic talents, which the New Art Impressionist Wallace Berman in Los Angeles had already recognized and promoted in him, his “Art Circle “ ( Aka Semina Culture ) he joined in 1956. His collages and so-called "cardboard mailers" (artistically designed envelopes) are valued in today's art catalogs as extraordinary to brilliant. Some of these are on display today at the Santa Monica Museum of Art in Los Angeles.

In 1965 he had his last known celluloid appearance in Piero Heliczer's underground experimental film Dirt .

Around the turn of the year 1967/1968 Robert Driscoll left Warhol's Entourage and The Factory and disappeared completely impoverished and disaffected into Manhattan's underground. On March 30, 1968, two boys playing found his body in an abandoned and derelict tenement on East 10th St. in the East Village . He had died of heart failure. The cause was advanced coronary arterial calcification as a result of his long-term drug use, the autopsy revealed. No fresh needle sticks or drugs were found in his body.

When no relatives claimed his body after the statutory deadline, and his identity could not be determined initially, he was buried as an unknown homeless person in a mass grave at New York's poor cemetery, the so-called "Potter's Field" on Hart Island . It was not until the end of 1969, about nineteen months after his death, that his fingerprints were compared to identify him. Since Bobby's father was dying, his mother had asked friends of the Disney corporation for help in finding their son, using their existing contacts in New York.

Bobby Driscoll's untimely death was not known to the public until 1971/1972 when his first Disney classic Uncle Remus' Wonderland was re-released when reporters searched for the whereabouts of the leading actors. In an interview with the mother, they learned the circumstances of his death. Driscoll's remains rest on Hart Island to this day. His name is written on his father's tombstone, a so-called cenotaph .