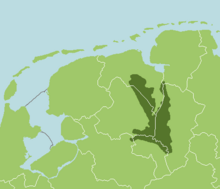 The Bourtanger Moor ( Dutch Bourtangerveen ) was formerly the largest contiguous moor area in Western Europe, until the 1950s one of the largest moor areas in Germany and is located in the Emsland west of the Ems . In the west it extends into the Netherlands and is named after the Dutch fortified town of Bourtange .

The former moor area still has a size of around 200 square kilometers. It stretched in a north-south direction for a good 40 kilometers between the municipality of Rhede in the north and Twist and Wietmarschen in the county of Bentheim in the south. The width is a good 12-15 km between the villages of Emmen and Ter Apel in the west on Dutch territory and Dörpen , Haren-Rütenbrock and Meppen on the German side.

While in the last few centuries only comparatively small areas were peated and made arable, in the 1950s almost the entire moor was drained and made available as pasture or arable land, especially for displaced persons from the German eastern areas , thanks to financial means from the Emsland Plan . But behind this was also the fear of an annexation of the fallow land in the border area by the Netherlands .

From the formerly large moorland, only small remnants remained, some of which are now under nature protection . The Bourtanger Moor is therefore characterized today by rather extensive agriculture ; most of the newly established bog colonies expanded significantly after the Second World War . In addition, industrial potting continues, for example in a peat factory in Wietmarschen.

The western Emsland and the north-western county of Bentheim and thus also the Bourtanger Moor are meanwhile opened up by the now completed Autobahn 31 as well as the federal highway 70 and the Emsland line running on the eastern edge of the moor (course book line 395 of the Deutsche Bahn ) between Münster and Emden .

Several bog bodies were found in the Bourtanger Moor , including the man from Neu Versen known as Roter Franz , the bog body from Kibbelgaarn and the men from Weerdinge .