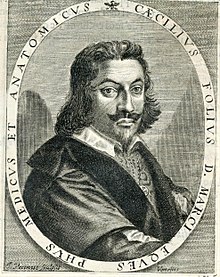 Folli, whose father fell as captain of the Republic of Venice in their dispute with the Habsburgs over Gradisca d'Isonzo , grew up with his uncle Giambattista Folli, the city physicus ( protomedico ) of Venice. Here he also received his schooling. During the plague in 1630 he assisted his uncle and edited the official report Vero racconto di tutto quello è occorso l'anno 1630 nel contagio pestilente che disertò l'inclita città di Venezia .

He then studied human medicine at the University of Padua ; under Johannes Wesling he specialized in anatomy . After his doctorate as Dr. med. he returned to Venice.

He enjoyed the support of his uncle and Doge Francesco Erizzo and was made a Knight of the Order of St. Mark .

As early as 1636 he became professor of anatomy ( Lettore di anatomia ), in 1650 as the successor to his uncle Stadtphysicus ( protomedico della Sanità ). Since 1638 on the board of directors of the Medical and Surgical College of the Republic of Venice , he was its chairman in 1652 and 1671 ( priore del Collegio Chirurgico ).

In 1671, under his direction, a new anatomical theater was built on Campo San Giacomo dall'Orio in Venice, which, however, along with its library, archive and a bust of Follis, was destroyed by fire in 1800.

Folli left three relatively narrow works, which, however, were distinguished by their very precise observations and drawings for the time.

In his dissertation from 1639 he described a persistent foramen oval in the heart , which he had found during a section in 1637. However, he did not consider the atrial septal defect to be a defect and drew the wrong conclusion that William Harvey's then relatively new circulation theory was incorrect . So he stuck to Galen's traditional view, which Harvey had refuted .

Drawing of the hammer (1909) with processus folii (right)

His short, famous Nova auris internae delineatio from 1645 (two pages dedicated to Thomas Bartholin , three pages of explanations and a table) offered for the first time precise drawings and descriptions of the inner parts of the human ear , such as the semicircular canals . The processus anterior , an extension of the hammer in the ear, was drawn and described here for the first time; it was therefore later called processus Folii .