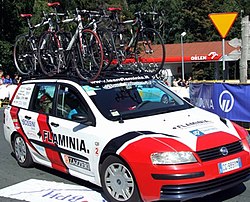 Team vehicle of the team

The team took part in the UCI Europe Tour in 2005 as a Continental team . Since 2006 she has had an Italian license as a Professional Continental Team and was thus able to be invited to ProTour events. She received her first wildcard for the Tour of Poland in 2006 . Since 2008 she drove with an Irish license. The manager was Massimo Podenzana , he was supported by the sporting directors Orlando Maini and Omar Piscina.

For the 2011 season, the team merged with De Rosa-Stac Plastic to form the Professional Continental Team De Rosa-Ceramica Flaminia .

Success in the Europe Tour