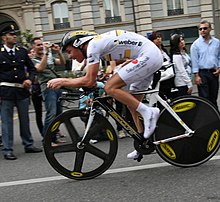 Riccardo Riccò (born September 1, 1983 in Formigine , Province of Modena ) is a former Italian cyclist . He is the second of the Giro d'Italia 2008 . He was banned twice for doping offenses , the last time for a period of twelve years.

Riccò was already very successful as a young driver. In 2001 he became the Italian junior champion in cyclocross . Two years later he won a stage in the Baby Giro . In the 2004 season he was Italian champion of the U23 class and in 2005 he won the overall standings including two stages at the Lombard week and one stage of the U23 tour of Tuscany .

In 2006 Riccò became a professional with the Saunier Duval-Prodir team . In 2007 he won two stages and the points classification at the Pro Tour race Tirreno - Adriatico . He also wore the overall leader's jersey for one day. He was then nominated for the Giro d'Italia and, together with climbing specialist Leonardo Piepoli, was supposed to support his team captain and two-time winner of the Giros Gilberto Simoni on the mountain. Like Piepoli, he won a mountain finish and finished sixth in the overall standings. However, the Saunier-Duval team leadership refused Riccò's tour start.

In 2008 Riccò took on the Giro d'Italia as captain for his Saunier-Duval Scott team. He scored two stage wins and fought an exciting battle with Alberto Contador for victory. However, he lost almost two minutes in the final time trial and had no more chance. During the Giros he aroused displeasure in the peloton with his statements “You don't need friends to win a race” and “With a better team I would have won the Giro.” After doping incidents at the 2008 Tour de France , he was banned.

After his doping ban, Riccò started the 2010 season with Team Ceramica Flaminia . He won two stages of the Tour of Austria and also clinched the overall victory, although he had a bad crash in the time trial on the penultimate day. From September 1st 2010 he was under contract with Vacansoleil .

Riccò's great role model is, according to his own statement, the late tour and giro winner Marco Pantani . Both are or were pure climbers with the aim of winning Grand Tours (Giro d'Italia, Tour de France, Vuelta a España). Riccò was considered to be the greatest talent in Italian cycling, as classic skills were added to his climbing skills.

At the Giro d'Italia 2007 , Riccò delivered a suspicious doping test after reaching the mountain on Monte Zoncolan , as it had abnormally low hormone levels, which can be an indication of the use of drugs masking doping.

Riccò was tested positive for EPO doping in the A sample of the 95th Tour de France in 2008 . With the exception of the B sample, he used the third generation of EPO, namely the preparation CERA / Micera . This third doping case of the 2008 Tour de France immediately resulted in the management of Riccò's Saunier Duval team taking all drivers out of the race. At this point in time, the team had already won three sections of the first 11 stages, two of which were through Riccò, who was wearing the dotted jersey at the time . Following the scandal, the sponsor decided to get out of cycling with immediate effect. A few days after the end of the "tour" Riccò admitted his offense.

In June 2010, Riccò was sentenced by a French court to two months suspended prison sentence and a fine of 3,000 euros. The court punished possession and use of doping preparations during the Tour de France 2008. Riccò had tested positive for the blood doping drug CERA shortly after his two impressive stage victories. His lawyers had argued in vain that the 26-year-old had already been sentenced to a fine of 5,710 euros in Italy. He was also banned for 20 months.

On February 6, 2011 Riccò was admitted to hospital with acute kidney failure . The initially critical condition was later assessed as stable. Two days later, he confessed to having had an autologous transfusion with blood that he had kept in the refrigerator for 25 days. He attributes his health problems to this. As a result, he was suspended first from his team Vacansoleil and then in June 2011 by the Italian Federation (FCI) for health reasons. In October 2011 the National Olympic Committee of Italy (CONI) called for Riccò to be suspended for twelve years; on April 19, 2012, the National Anti-Doping Tribunal of Italy followed this request. After Riccò was refused an application for a license from the Croatian Cycling Association for formal reasons - he does not have a residence in Croatia - at the beginning of 2012, he initially declared his final resignation after the ban was announced, but appealed against the judgment before the World Sports Court of Arbitration for Sport (CAS) on charges of procedural errors and partiality. The appeal was dismissed on March 1, 2013 by the CAS arbitrator. Riccó's arguments are unfounded and, in particular, the allegation of partiality is not presented.

Placements in the Grand Tours

Overall winner of the Tour of Austria