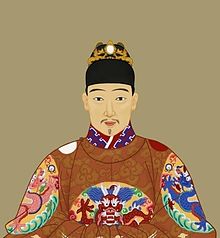 Chongzhen grew up quite carefree because he was only the younger son of Emperor Taichang and did not participate in the intrigues and the web of fraud and corruption surrounding his brother Tianqi . At seventeen he followed his brother in 1627 in the office of the emperor and was the first to eliminate the power-hungry eunuch Wei Zhongxian and all his followers, as well as the lady Ke . Unlike his predecessor, Chongzhen tried to rule alone and earnestly solve the problems of his dynasty. But the completely empty state coffers largely ruined his efforts. His edicts were not implemented because large parts of the bureaucracy were unable to act, or in some provinces no longer existed at all. He could not find capable ministers who would have supported his reforms, so that important posts were filled with weak people. The Ming court had finally cut itself off and isolated itself from society. Chongzhen became increasingly frustrated by the indolence of his subordinates and distrusted those around him more and more, which drove him to harsh penalties for disloyalty. For example, he had each of his six ministers replaced by a different one on average every year, and those released were often persecuted with cruel sentences. This behavior of the emperor had its origins in childhood; z. B. when his father Taichang had his mother, the Empress Xiaochun killed, and Chongzhen developed an increasingly suspicious attitude over time. Then there were the remaining eunuchs who had become so strong under Wei Zhongxian and whose influence extended to the army leadership. For the latter aspect, too, he made the mistake of arresting and executing the extremely capable commander-in-chief of the northern border troops, Yuan Chonghuan , in 1630, although the allegations against him were unfounded. In response, his entire army defected to the Manchu under Hong Taiji . From then on there was no longer a general talented enough to hold back the Manchus in the north. In 1638 they conquered China's most important vassal state, Korea , whereupon other states in Southeast Asia no longer recognized the sovereignty of China. The entire foreign policy network of the Ming in East Asia disintegrated more and more.

The Chongzhen Emperor also faced a collapsing empire within. China once profited greatly from the European colonies in America. Most of the silver mined there flowed to China to buy luxury goods for the European market. With the outbreak of the Thirty Years War, however, this source dried up because the silver was needed for the war in Europe. This caused lasting damage to the Chinese economy. Entire branches of the economy collapsed, followed by hoarding of silver, a shortage of goods and ultimately mass poverty.

The Little Ice Age was an aggravating weather phenomenon. Damp and unusually cold summers and winters led to crop failures, followed by famine . Due to the lack of government finance, practically all major irrigation and flood control projects were canceled. The situation of the Chinese farmers became more and more critical. Peasant revolts flared up across the country, but there were few troops to quell them. The Ming court gradually lost control of the provincial administration. In this desperate situation the plague broke out in China and millions of people were killed.

In central China, the former soldier Li Zicheng managed to lead the rebellious peasants and armies. Looting and pillaging, he roamed the country and finally conquered the provinces of Hubei , Henan and Shanxi as a power base. There he founded his own dynasty and claimed the imperial throne for himself. In April 1644 he began a major offensive on Beijing . Defectors opened the city gates for him, so that the capital fell to the rebels without a fight. Emperor Chongzhen awoke on the morning of April 25th and asked for a report on what had happened. But none of his ministers appeared at his request. He quickly discovered that the entire palace staff had fled. Even the palace guards were gone. When he saw the rebel troops pouring into the outskirts of Beijing, he realized that his dynasty was lost. Chongzhen made sure his sons escaped from the capital, after which he ordered the rest of the imperial family to commit suicide. After the empress hanged himself, the emperor got drunk, left the Forbidden City and went to Jingshan Park, accompanied only by his serf . There he hanged himself on the now known Guilty Chinese Scholar Tree . This ended the 276-year rule of the Ming Dynasty founded by Emperor Hongwu .

The rebel Li Zicheng was not allowed to enjoy his victory. The Ming General Wu Sangui went over to the Manchu and opened the Shanhaiguan Pass in the Great Wall of China for them. The Manchus quickly captured Beijing and drove out the rebels. The Manchu regent Dorgon proclaimed the Qing Dynasty and installed his nephew Shunzhi as the new emperor of China. The Qing stylized themselves as the avengers of the Ming and Emperor Chongzhen was given an honorable burial in the Ming tombs . Li Zicheng was killed by the Manchus in 1645, while the Ming princes continued to resist Qing rule in the south .