The Club Bertelsmann was a company of DirectGroup Bertelsmann . The club emerged from the Bertelsmann Lesering , which Reinhard Mohn founded on June 1, 1950. 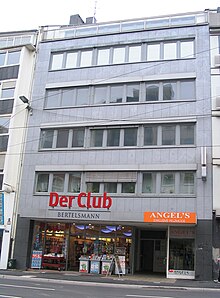 Since there weren't enough bookshops nationwide until after the Second World War, Mohn came up with the idea of ​​using a “reading ring” to bring books directly to the reader. Bertelsmann Lesering already had a million members in 1954 and its success gave Bertelsmann the opportunity to expand its business. In 2005, the club said it had around three million members. The number of members had thus halved since 1992 (six million members).

The club had belonged to Direct Group Bertelsmann since 200 , the business division for club and direct marketing as an umbrella for book clubs in various European countries, which was a 100 percent subsidiary of Bertelsmann SE & Co. KGaA. It was dissolved again as a division in 2011.

In June 2014, Bertelsmann announced that the club, with a current membership of around 1 million, would be discontinued during 2015. The economic importance for the company has steadily dwindled. In 2014 there were only 52 branches. On March 31, 2015, the last two book club branches in Gütersloh and Rheda closed and in June 2015 there were only 600,000 club members.

The club issued books as special editions with a time lag compared to the original edition and was therefore able to offer them to its members at a lower price than in the price-controlled bookstore. The framework conditions were specified in the Potsdam Protocol of 1995 and modified again in 2004:

In May 2014, customers were served by a network of 59 branches across Germany. They also had the option of ordering products via the monthly catalog or on the Internet. The last branches were closed in the first half of 2015.

In addition to the traditional book business, the range also included numerous other product groups:

Since the beginning of 2004, book club customers have also been able to choose from 450,000 German and English-language titles from the regular book trade offer.

In addition to the delayed editions, Club Bertelsmann published around 50 premieres a year that were only available in bookshops on average six months later. The first premiere of a bestselling author was published in 2002 by John Grisham 's Farm . In 2008, The Catalan by Noah Gordon as a club premiere brought to the German market. In addition, works by David Baldacci , Paulo Coelho , Ken Follett , Charlotte Link and Nora Roberts have premiered over the past few years . Authors such as Katia Fox (The Copper Sign) , Linda Holeman (Emerald Bird) and Senek Rosenblum were discovered through club premieres.

The Bertelsmann Club set up an advisory board for authors with Walter Kempowski , Tanja Kinkel and Gaby Hauptmann . According to its own statement, the club initially wanted to "introduce popular club authors in the catalog". In the course of time, according to the club, the task shifted “in the direction of promoting reading”. Authors such as Amelie Fried , Thea Dorn , Wolfgang Herles , Wladimir Kaminer , Hellmuth Karasek and Ijoma Mangold have recommended reading tips in the club catalog since 2005 . When Amelie Fried and Ijoma Mangold were entrusted with the moderation for the ZDF literary program Die Vorleser , the two of them ended their work on the authors' advisory board in order, as they said, to “avoid overlapping interests”. Her successors were Susanne Fröhlich , Jenny-Mai Nuyen and Richard David Precht . According to the club, they should “guarantee the continuity of this type of reading promotion”.

In 1991 Club Bertelsmann founded the reading festival "Leipzig reads" together with the Leipzig Book Fair and the city of Leipzig. In 2009 over 1500 authors presented their new books on four days of the fair on the exhibition grounds and in 300 different locations in the city of Leipzig. The supporting program includes series of events such as the “Jewish Reading Worlds” and the “Crime Club”. Under the heading “Memory as the present”, contemporary authors put different memories side by side in the “Jewish Worlds”. Writers such as Louis Begley , Saul Friedländer , Fritz J. Raddatz or Senek Rosenblum read from their books and told their life stories.

Crime fans meet on the Thursday and Friday of the fair from 7 pm in the Leipzig district court for the traditional “crime club”.

On the occasion of the 40th anniversary of German-Israeli relations, Club Bertelsmann and the Embassy of the State of Israel founded the reading series “German-Israeli Relations” in 2005 . Israeli authors such as Amos Oz , Zeruya Shalev and David Grossman read alongside German authors such as Eva Menasse and Gila Lustiger . Students from the German Literature Institute in Leipzig presented current books by Israeli authors under the title "Reading Experiences - Writing Experiences". The series of events was under the patronage of the Israeli ambassador HE Yoram Ben-Zeev.

The Blue Sofa was launched as a joint authors' forum by Club Bertelsmann, the ZDF culture magazine aspekte , Deutschlandradio Kultur and the Süddeutsche Zeitung . The Blue Sofa presents authors and their books at the book fairs in Frankfurt and Leipzig. In autumn 2005 the Blue Sofa Berlin celebrated its premiere in the Berliner Ensemble .

The book trailer was a competition for young talent aimed at creative students and graduates of film and media courses in Germany, Austria and Switzerland. The participants drafted scripts for book trailers of up to 60 seconds in length for a book premiere by Club Bertelsmann. A jury chaired by the film producer Nico Hofmann selected the best three scripts. The students, whose scripts were selected as the best three concepts by the jury, received a limited budget and produced their book trailers on their own.