Cooperstown is a small city in the US state of New York . In 2010 the city had a population of 1852 and an area of ​​4.7 km². Cooperstown is the administrative seat of Otsego County and is located at the southern end of Otsego Lake . Near the city, one of the two headwaters of the Susquehanna River leaves the lake.

Since 1812, the largest part (western part) of the city is part of the "Town" Otsego ; the rest (eastern part) belongs to the "Town" Middlefield . The city has strict building regulations to keep its historic appearance. The Baseball Hall of Fame, founded in 1939, is located in Cooperstown .

In 1782, Judge William Cooper , the father of the writer James Fenimore Cooper , acquired the area on southern Otsego Lake and subsequently founded the city. It was named after its founder. James Fenimore Cooper, known for his leather stocking novels, lived there for a long time and also died in the city. The area around Otsego Lake was the setting in two of the novels. 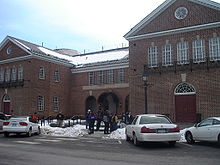 In 1939 the Baseball Hall of Fame was founded in the city because it was wrongly assumed that baseball was invented by Abner Doubleday in a cow pasture near the city in 1838/39 .

Another attraction of the city is the “Farmer Museum”, which comprises two dozen buildings and 23,000 exhibits. The site was acquired by James Fenimore Cooper in 1813 and operated as a farm. Around 1870 it became the property of the Clark family. The museum was opened in 1944; in addition to the exhibits on the history of farming, it is also dedicated to the history of Otsego County. Connected to the Farmer Museum is the "Fenimore Art Museum", which has been based in the city since 1939 and contains collections of American paintings, Native American art, American folklore art and American photography. The "New York State Historical Association Library" with a collection of historical documents on the history of the state of New York has also been located in the city since 1944.

Eight miles north of the city is the Alice Busch Opera Theater , which is home to the Glimmerglass Festival in summer , the second largest summer opera festival in the United States. The festival was founded in 1975; it first took place in the auditorium of Cooperstown High School. In 1987 the opera house was opened.

In 1997 the Ommegang brewery was founded four miles south of the city in the Susquehanna Valley. It is located on the site of a former hop farm and brews beer based on the Belgian model. The brewery grew rapidly and was sold to the Belgian brewery Duvel in 2003 . The brewery can be visited.

In 1856, Edward Clark , one of the founders of the Singer Sewing Machine Company , and his wife, Caroline Jordan, were from the city, buying properties in and around Cooperstown. He built the first hospital in the city and the Kingfisher Tower near it . His son Alfred Corning Clark built the first sports hall in Cooperstown between 1888 and 1891, which was demolished and rebuilt by other members of the family in 1930 and 1980. The grandson Stephen Carlton Clark was President of the Baseball Hall of Fame; he was instrumental in setting up the museums mentioned above. The Clark family is still based in Cooperstown today and acts as the city's benefactors.

The movie " A League of Their Own " with Tom Hanks , Geena Davis and Madonna from 1992, the playing of two baseball sisters during the Second World War is, was partially filmed in the city. Parts of the film "Cooperstown - On the Streets of Memory" with Josh Charles and Graham Greene from 1993, about a baseball player, also play in the city. Lauren Groff set a literary monument for the city in her novel The Monsters of Templeton .