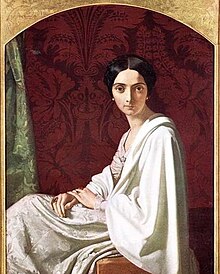 The daughter of Gerolamo Trivulzio (1778-1812) and Vittoria dei Marchesi Gherardini (1790-1836) was born as Cristina Trivulzio. At the age of 16, she married Prince Emilio Barbiano di Belgiojoso on September 24, 1824 in the San Fedele church in Milan. 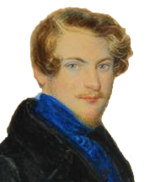 Both her own family and that of her husband belonged to the northern Italian rebel circles who wanted to liberate the country from the Austro-Habsburg rule. Cristina was also enthusiastic about these ideas. After four years she left her husband and devoted herself entirely to the freedom movement, the Risorgimento . Cristina wrote pamphlets of the resistance and was active as a messenger and passport forger. Before the persecution by the people of the Austrian State Chancellor Metternich , she fled under adventurous circumstances to Marseille , where she was accepted by the community of Italian emigrants. In 1831 she moved from there to Paris . Her literary-political salon there in the Rue d'Anjou became a magnet for exiled Italians. There she met Lafayette, among others, and Heinrich Heine in March 1833 . From 1834 she and Heine had a lifelong close friendship. He stayed frequently in her Paris home and in her castle, La Jonchère, near Bougival . In February 1834 she also supported Giuseppe Mazzini's Freikorps particularly generously - with the support of German and Polish comrades-in-arms, Mazzini's militants had planned an invasion of Savoy , which was nipped in the bud; Mazzini fled to Paris.

In Paris, Belgiojoso also turned to historiography, particularly inspired by the historian François-Auguste Mignet , with whom she had a long relationship and who was probably also the father of their daughter Marie, who was born in 1838. From 1836 she ran a literary salon , in which Honoré de Balzac , Frédéric Chopin , Franz Liszt and Alfred de Musset also frequented.

After a general amnesty at the beginning of the 1840s, Belgiojoso was able to return to her beloved home for the first time and from then on commuted between Paris and Locate near Milan. During this time she wrote several major historical works on the history of Lombardy and Austrian rule as well as the origin of Catholic dogma . The work on dogma came on the papal index and could only appear in France. Belgiojoso remained closely linked to the struggle for freedom, and when the revolution broke out in 1848 it was right in the middle of the action in Rome. She equipped a volunteer corps herself. But this attempt also failed because the French army saved the Papal States. Disappointed in France, Cristina emigrated to Turkey with her daughter and a nanny and moved to an agricultural commune of Italian emigrants. There she wrote works about Turkish culture. In the mid-1850s she was able to return to Milan, where she continued to work as a writer. In 1861, Camillo Cavour fulfilled her dream: Italy became an independent nation state. Ten years later she died at the age of 63 at the family home in Locate.