This article deals with the painter; for the American artist and museum director see Henri Lehmann (archaeologist) (1905–1991).

Karl Heinrich Rudolph Lehmann , French also and mainly in art literature. Henri Lehmann (* 14. April 1814 in Kiel , † 31 March 1882 in Paris ) was a in France naturalized this historical and portrait painter of Classicism .

Lehmann's parents had fled to Kiel during the French occupation of Hamburg. He received his first lessons from his father Leo Lehmann , Gerdt Hardorff and Siegfried Detlev Bendixen , then from 1831 from Ingres in Paris; next to Hippolyte Flandrin he was his best pupil. He first appeared in the salon in 1835 with Tobias and the Angel . In 1837 he was created by Louis-Philippe commissioned the death of Robert the Strong for the gallery of Versailles to paint. Towards the end of the year he moved to Munich , where his brother Rudolf Lehmann had attended the art academy since 1837. In 1838 Lehmann traveled to Rome, where his former teacher Ingres introduced him to the art scene. He portrayed Franz Liszt and his girlfriend, the writer Marie d'Agoult . After the prominent couple left Rome, an intense correspondence began, which was characterized by deep friendship. After a short stay in Paris, Lehmann returned to Italy with Théodore Chassériau at the end of June 1840 , where friends became rivals.

At the beginning of 1842 Lehmann settled in Paris, where he was sought after by the sophisticated and intellectual elite as a portrait painter. He portrayed a. a. Stendhal, Chopin, Meyerbeer and Alexander von Humboldt. In 1847 he was naturalized as a French. In 1851 he became financially independent by marrying Louise-Alexandrine Casadvantage. In 1846 he became a knight, in 1853 an officer of the Legion of Honor , in 1864 a member of the Académie des Beaux-Arts and in 1875 a professor at the same. 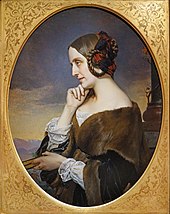 Among the artist's easel pictures are:

These images are characterized by the delicacy and power of modeling and grace of form. His knowledge of forms was particularly useful in his numerous portraits . Lehmann was excellent at decorative painting in festive and grand rooms. In the late 1850s he painted in the throne room of the Palais du Luxembourg , then in the Palais de Justice in Paris .

Among his monumental church paintings, those in the Chapel of the Holy Spirit at St. Merry are the most important; of the altarpieces are the flagellation of Christ (from 1842, in St. Nicolas in Boulogne) and the Assumption of the Virgin . His critics, however, complain that his creations often have a more academic character that lacks truth and warmth.

Lehmann's works can be found in the following institutions: