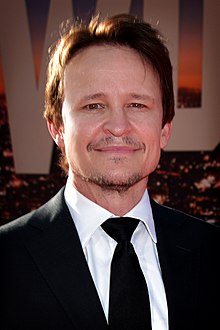 Damon Herriman was introduced to acting at an early age and starred in local television commercials from the age of eight before getting a role on The Sullivans two years later . After many other roles in Australian productions, he has appeared more frequently in US productions since 2005.

Mainly Herriman can be seen in various television series, he played the role of Dewey Crowe in the drama series Justified from 2010 to 2015 , was part of the cast of Battle Creek in 2015 as Detective Niblett , appeared in the miniseries Flesh and Bone as the homeless Romeo and took on the role of Buddy in Quarry in 2016 .

He was nominated for the AACTA Award for the first time in 2013 for his portrayal of Marcus Dwyer in the comedy series Laid . Further nominations followed in 2015 and 2016 for the comedy The Little Death - A Comedy About Sex and the tragic comedy Down Under . In 2017 he won the Logie Award for Best Supporting Actor for his role in the drama series Secret City .

In 2018 he was cast as Charles Manson in the film Once Upon a Time in Hollywood by director Quentin Tarantino . He was also seen as the older Manson, who had already been imprisoned, in a scene in the second season of the Netflix series Mindhunter , which appeared in August 2019.