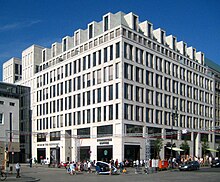 The party was founded in 2013 by Christoph Hörstel . The publicist and political activist was federal chairman of the party until October 2017.

For the 2017 federal election, the party used the slogan “Help people - instead of promoting migration ” and was supported by the hip-hop band The Bandwidth . The party could be elected nationwide, with the exception of Hamburg, Saxony, Saxony-Anhalt, Schleswig-Holstein, Rhineland-Palatinate and Mecklenburg-Western Pomerania.

In November 2017, Hörstel as well as the 2nd federal chairman, the party spokesman for finances and the federal secretary general announced their resignation from their offices and the exit from the party.

In November 2018, all positions on the Executive Board were filled again.

According to the Tagesschau "[the party] can be described as critical of Israel". In its foreign policy program, it rejects a German raison d'être for the security of Israel and advocates a one-state solution with full right of return for all Palestinians. In addition, it refuses to participate in combat missions with German soldiers outside the NATO area and wants Germany to leave the Euro Group .

Regarding immigration policy, there are restrictive demands in the party program such as a new law on foreigners with low upper limits. In addition, Deutsche Mitte would like to prevent mass immigration at the external borders through peace policy and political, economic and humanitarian aid in the countries of origin and initial reception, and to reject migrants who are unwilling to integrate. On the other hand, “lawful immigrants” should be better integrated and treated.

The party calls for a simplification and, in the long term, an extensive abolition of the tax system and at the same time wants to promote “alternative and regional currencies” and reintroduce the German mark . It also provides the independence of the media in question, which is why they the financing of public service broadcasting would like to set.

The German center wants to promote families through premiums. It intends to pay out EUR 5,000 for the birth of the first child and EUR 10,000 for the birth of each additional child and to double the child benefit, but only for "intact families in orderly circumstances in which married biological parents raise their own children." Compulsory school attendance for children is to be abolished. The party believes that every able-bodied person has a job and intends to introduce an unconditional basic income exclusively for German citizens after a transition period of 3 to 5 years . During the transition period, there should be a solidarity basic income of around 1,200 euros for charitable work .

In terms of health policy, the party opposes “overpriced antitrust medicine”. It strives for "free basic medical care for everyone" and the recognition of "holistic" methods . The German center is opposed to vaccinations and wants to end the "vaccination bullying". She sees the “real causes of illness” in pesticides, environmental and drug poisons, electrosmog, junk food and air pollution, for example .

In addition, Deutsche Mitte rejects gender mainstreaming and demands the "disclosure of secret documents, for example about espionage, new technologies and extraterrestrial life ".

The rhetoric and the program of the DM contain populist elements and, according to TAZ, among other things , conspiracy-theoretical and right-wing positions reminiscent of Reich citizens , such as an alleged lack of sovereignty in Germany, as well as ideas from the founder of anthroposophy Rudolf Steiner .

Benjamin Steinitz from the Anti-Semitism Research and Information Center (RIAS), which is funded by the Berlin Senate , classifies the German center, which he observed at the Berlin Al-Quds March 2017, as a “ right cross front party”. According to the Hamburg state coordination office of the advisory network against right-wing extremism , which is part of the Johann Daniel Lawaetz Foundation , the party tried in 2017 "under the umbrella of the Hamburg peace movement [...] to spread anti-Semitic attitudes on the Hamburg Easter March ".

The structure of the German Center is, as prescribed by the political party law, classically organized into the board, sub-associations, regional associations and their chairmen.