The Jamiʿ at-tawārīch ( Arabic جامع التواريخ, DMG Ǧāmiʿ at-tawārīḫ , Persian جامع‌التواریخ, 'Collection of Chronicles', Mongolian Судрын чуулган Sudar-yn Chuulgan ) is an encyclopedic work from the time of the Mongol Ilchanate in Persia . It was written at the beginning of the 14th century by Raschid ad-Din (Rašīd ad-Dīn Faḍl Allāh, 1247-1318), who was a vizier at the court of the Ilkhan. Due to the diversity of the topics dealt with, the work is regarded as "first world history". UNESCO has included the works in the list of World Document Heritage .

The work was originally laid out in three volumes. A total of around 400 pages in several editions in Persian , Arabic and Mongolian have been preserved . It describes the culture and important events in world history from China to Europe as well as the history of the Mongols. In addition to the " Secret History of the Mongols ", the universal history is the most important historical source for the early Mongolian history.

Ilchan Mahmud Ghazan intended to keep the memory of the nomadic roots of Mongolian culture alive after the Mongols had settled and adapted to the customs of the Persia they ruled. This section of the Djami 'at-tawarich with the title "Ta'rich-i Ghazani" describes the history of the Mongols and their origins from the steppe. In order to put his work together, Rashid ad-Din built an entire complex of buildings, the "Rab'i Raschidi" in the Ilkhan capital of Tabriz , which includes a mosque, a hospital, a library and classrooms. The foundation charter of the "Rab'i Raschidi" has been part of the world document heritage since 2007 . After Ghazan's Ilchan's death, his successor Oldjeitu commissioned Rashid ad-Din to expand his work and write a history of the entire known world. The work was completed between 1306 and 1311.

After Rashid ad-Din was executed in 1318, the Rab'i Raschidi Foundation was looted, but the manuscript was preserved. The foundation was later restored to the buildings by his son, the vizier Ghiyath al-Din. The text of the Dschami 'at-tawarich later served as a template for an illuminated, still preserved version of the Shāhnāme , which is known today as the "Demotte-Shāhnāme".

Mohammed subjugates the Banu Nadir tribe . From the Djami 'at-tawarich 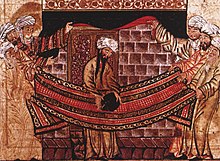 Mohammed attaching the black stone , from a book illustration by Jami at-tawarich (1315)

Ta'rich-i Ghazani
The most detailed part of the manuscript included:

Shu'ab-i Pandschganah
This part, preserved in two manuscripts in the library of the Topkapı Palace Museum (Ms. H. 2937), contains five genealogies of the Arabs, Jews, Mongols, Franks and Chinese.

Probably about 20 copies of the original manuscript of the Jami 'at-tawarich have been made; the Rab'i Raschidi Foundation had instructions to produce an Arabic and Persian manuscript each year, which should be distributed to different cities. Only a few of them are still preserved today. Later copies contain additional illustrations and texts on current events of the respective time.

The oldest known specimen is in Arabic and is dated to the early 14th century. It is only preserved in fragments. 151 folios of the manuscript are kept in the University of Edinburgh (Or.Ms 20), 59 folios are in the Nasser David Chalili collection.

The part kept in Edinburgh contains the older story up to the section on the Prophet Mohammed, the story of which continues in the part of the Chalili collection. The text is continued on different sheets in both collections, the conclusion is again in the Edinburgh manuscript.

The leaves in Edinburgh measure 41.5 × 34.2 cm, of which 37 × 25 cm are written on. Per 35 lines per page in Nashi - calligraphy written. Folios 1, 2, 70–170, and the end are missing. An entry added later dates the manuscript to 1306–1307. The content consists of four parts: The history of Persia and Arabia before the Islamic period, the history of the Prophet and the Caliphs, the history of the Ghaznavids , Seljuks and Atabeys , and the history of the Khorezm Shahs .

Birth of Christ, Master of the Peribleptos Church in Mistra, fresco, approx. 1348/80

The Edinburgh manuscript was found by the linguist Duncan Forbes in the estate of Colonel John Baillie in the early 19th century, which is why the manuscript is sometimes referred to as the "Baillie manuscript". It contains 70 miniatures in an unusual landscape format, each taking up only about a third of a page. This is attributed to Chinese influences. The miniatures are drawn in ink, painted in with watercolors, and richly decorated with silver leaf, which today has been blackened by oxidation. The influences of Christian pictorial traditions are also recognizable: The illustration of the birth of Muhammad follows the Byzantine iconography of the depiction of the birth of Christ, except that instead of the three wise men from the Orient, three women appear, while the position of Joseph comes from the Prophet's grandfather, ʿAbd al-Muttalib ibn Hashim , is taken. Like other early miniatures from the Ilkhanid period, these too differ from the few surviving Islamic miniatures from the same period in the design of their background, which consists of a complete landscape and not just individual rocks or plants. Architectural elements sometimes get an impression of spatial depth, which is created by different layering of the picture elements and the use of three-quarter views.

Four different painters and two assistants were identified in the illustrations:

Also noteworthy is the depiction of different ethnic characters who differ not only in their physical characteristics, but also in the way their clothes and headgear are depicted. A distinction is made between Abyssinians, Europeans (represented in a comparable way as in Christian-Syrian manuscripts), Chinese, Mongols and Arabs.

The Edinburgh folios were shown at an exhibition at the Edinburgh University Library in the summer of 2014.

Folios in the Khalili Collection 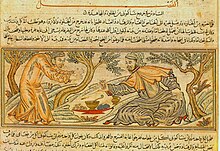 The Arabic manuscript in the Khalili Collection (MSS727) contains 59 folios, 35 of which are illustrated. Until 1980 the sheets were owned by the Royal Asiatic Society in London, in whose collection they were rediscovered by William Morley in 1841. For a while it was on display in the “King's Library” of the British Museum . The sheets contain a different part of the manuscript than the Edinburgh fragments, and measure 43.5 × 30 cm. It is therefore likely that they come from another copy of the manuscript. The sketchy text may today lack those folio sheets that were not illustrated.

The manuscript contains 20 illustrations and 15 pages with portraits of Chinese emperors. The text covers the history of Islam, the period of Chinese history before 1300, the history of India and part of the history of the Jews. Again works by the masters from Luhrasp and Alp Arslan can be seen. Slight stylistic differences can be explained by different manufacturing times. Another, new painter was responsible for the portraits of the Chinese emperors, who must have been very familiar with Chinese painting: His miniatures are Chinese wall paintings from the time of the Yuan dynasty in their lines, painting and the use of black and red colors similar. The folios are inscribed and dated to 1314; the place of their manufacture is indicated in Tabriz under the direction of Raschid ad-Din.

There are two manuscript copies from the 14th century in the library of the Topkapı Palace in Istanbul: 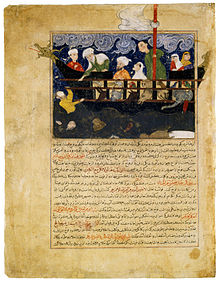 After the Timurids came to power in Persia , interest in Raschid ad-Din's work continued. Timur's son Shāh Ruch owned copies of the Jami 'at-tawarich, and commissioned his court historian āfeẓ-e Abru to write a sequel. The earliest surviving manuscript (Topkapı Palace Library, MS B 282), dated 1415-16, contains the original text with the addition of Ḥāfeẓ. Another manuscript in the Bibliothèque nationale de France , Supplément persan 1113, from around 1430, contains 113 miniatures. Most of these retain the Ichanid landscape format, but show the influences of Timurid art in the composition, clothing and color scheme.