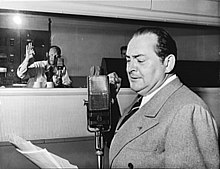 Günther Edward Arnold Schneider was born in New York City as the son of German immigrants. At the age of twelve he was on stage for the first time in the Merchant of Venice . He made his professional debut in 1907 at the side of Ethel Barrymore . After a few minor film roles, Arnold played his first significant role in 1916 in The Misleading Lady at the side of Henry B. Walthall . He appeared in numerous silent films until 1919, then went back to the stage and did not return to film until 1932. In his early film career, he played leading roles more often, for example in Diamond Jim from 1935, where he played the American millionaire James Buchanan Brady . He was to play this again in 1940 in the film Lillian Russell . Another success for him was the role of businessman Barney Glasgow, interested only in material wealth, in the Oscar-winning drama Take What You Can Get (1936).

Arnold starred in almost 150 feature films, the best known today are his portrayals of unscrupulous tycoons in three films by Frank Capra : While his character of a ruthless banker improves in Lebenskünstler (1938) at the end of the film, he played in Mr. Smith Goes to Washington (1939) and Here's John Doe (1941) corrupt millionaires reaching for political power. In the crime films Eyes in the Night and The Hidden Eyes , Arnold played the role of the blind but brilliant detective Duncan Maclain. Edward Arnold was active as an actor until his death and also worked as a radio and television actor in later years. From 1940 to 1942 he served as President of the Screen Actors Guild .

The three times married actor had three children. He died of a cerebral haemorrhage at the age of 66.

Presidents of the Screen Actors Guild