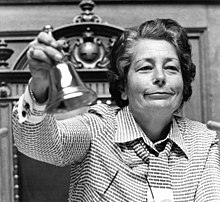 Elisabeth Steiner was born on July 13, 1922 in Schwyz, the youngest of four sisters. When her father, National Councilor Hans Steiner , became the first judge from the Canton of Schwyz to become federal judge in 1924 , the family moved to Lausanne . After graduating from high school, Elisabeth Steiner studied law at the University of Freiburg i.Üe. , where she also met her husband Alfred Blunschy. In 1947 she was one of the first two women to take her bar exam in Schwyz. She then ran a law firm in Schwyz together with her husband . One of her first political engagements was the presidium of the Swiss Catholic Women's Association . In this role she fought for the introduction of women's suffrage.

At the end of the 1960s she became a member of the commission of experts for the revision of family law. This was also a heavyweight of her political work in the 1970s and 1980s. In 1971 Elisabeth Blunschy-Steiner was elected to the first national councilors in the history of Switzerland together with nine other women. On May 2, 1977, she was elected the first female President of the National Council. In 1981 she received an honorary doctorate from the theological faculty of the University of Lucerne . After 16 years and three re-elections, she resigned from her position as National Councilor in 1987. In addition to her political offices, she also presided over Caritas Switzerland from 1977 to 1987 . Elisabeth Blunschy-Steiner had three children and three grandchildren - one of them, Dominik Blunschy is in the Cantonal Council of Schwyz - and last lived in Schwyz.