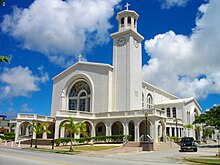 In March 2018, Archbishop Anthony Sablan Apuron OFMCap was dismissed from his office on suspicion of sexual abuse and the Congregation Court for the Doctrine of the Faith was banned from staying in the area of ​​his former archbishopric. He was given the opportunity to appeal. After the final rejection of the appeal on April 4, 2019, Michael Jude Byrnes succeeded him as Archbishop of Agaña.