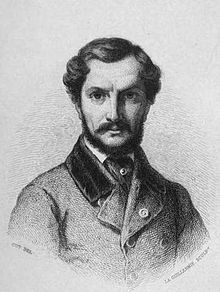 Duret was a student of his father, the sculptor François-Joseph Duret, and Bosios . After brief acting studies at the Paris Conservatory , he received the Prix ​​de Rome in 1823 together with Auguste Dumont . This enabled him to spend four years in Italy, during which he went to Naples several times to copy ancient works. In 1831 he won a gold medal with a something of Canova reminiscent Mercury, who invents the lyre . In 1833 he created the Neapolitan fisherman, dancing the tarantella (in the Louvre in Paris), the Chactas at Atala's grave and in 1836 the improviser, singing a love song .

For the Museum of Versailles he created statues of Molière , Dunois and Richelieu , for the church Ste.-Madeleine a Christ and St. Gabriel; he decorated the room of the sept cheminées in the Louvre with the Victorias, and for the foyer of the Théâtre français he created the statues of tragedy and comedy and the actress Rachel. In 1860 he completed the monumental Fontaine Saint-Michel fountain with Saint Michael slaying the dragon on the St.-Michel square in Paris.

As a professor at the École des beaux-arts , he worked more through his teaching than through his work. He died in 1865.