The Boulevard Saint-Michel ( bulvaʁ sɛ̃ miʃɛl ), colloquially Boul 'Mich' , forms the border between the 5th and 6th  arrondissement of Paris . The road running in north-south direction is 1380 meters long and 30 meters wide. 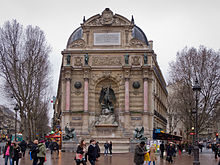 In its southern sector of the Boulevard Saint-Michel met with the park Jardin du Luxembourg . It is tunnelled along its entire length by line B of the S-Bahn- like rapid transit network Réseau express régional d'Île-de-France (RER). At its ends are the Saint-Michel - Notre-Dame and Port-Royal stations , with the Luxembourg station in between between the junction of Rue Gay-Lussac and Rue Auguste Comte.

The first part of the street to Rue Cujas was completed on August 11, 1855 as part of the extensive redesign of Paris under Baron Haussmann . It was not until four years later, on July 30, 1859, that the work that gave it its current course was finished.

During the construction of the Boulevard Saint-Michel, numerous medieval streets and squares of the old Quartier de Saint-Séverin , which had their origins in the 12th century , were greatly changed:

The following have completely disappeared in the course of the construction work:

When planning his new boulevards, Baron Haussmann often did not pay much attention to the old building fabric. Houses that were in the way of his new wide boulevards were often demolished without further ado.

Sights along the Boulevard Saint-Michel

View over the Boulevard Saint-Michel into the Rue Soufflot, in the background the Panthéon (painting by Jean-François Raffaëlli , 1918)

After the intersection with the Rue des Écoles , the Sorbonne complex , the oldest Parisian university, begins on the left . After about 150 meters, the Place de la Sorbonne turns left, which offers a view of the church building of the university.

The next major intersection is at Place Edmond Rostand . Rue Soufflot begins its short climb to the Pantheon on the left . The tombs of some of the most prominent French people in the fields of politics, science and literature are located in France's national hall of fame .

To the right of Place Edmond Rostand is the Jardin du Luxembourg . In addition to its extensive green spaces with the Palais du Luxembourg , the former palace park also houses the seat of the French Senate.

Behind the entrance to the Jardin du Luxembourg , the building of the École Nationale Supérieure des mines de Paris (ENSMP) rises on the right . To the 200 French écoles Grandes scoring Mining College is one of the major French engineering schools and was already in 1783 a decree King Louis XVI. founded.

Notable buildings and places of remembrance 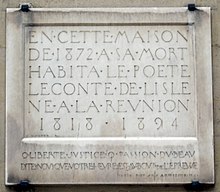 The most important buildings on Boulevard Saint-Michel are:

Genome boards for historical persons or events were attached to numerous buildings.

The northern part of the Boulevard Saint-Michel bordering the Seine is now one of the most popular and therefore busiest shopping streets in Paris. There are mainly bookshops, clothing, shoe and comic shops, as well as many street cafes and cinemas. The Fontaine Saint-Michel on the Place Saint-Michel is a popular meeting place for young people from all over the world. The Jardin du Luxembourg , which begins about 700 meters further south, is a popular green space in the city center with numerous chairs and benches. Under the Place Saint-Michel and the branch where there Rue Danton is located Metro Station Saint-Michel .