Prussia's resignations in peace at Lunéville and compensation through the Reichsdeputationshauptschluss

The peace treaty signed on February 9, 1801 in Lunéville between France and the Holy Roman Empire under the Roman-German Emperor Franz II is referred to as the Peace of Lunéville . The background to the treaty was that from 1793 the French revolutionary government pursued the goal of enforcing the Rhine as a “ natural border ” between the Holy Roman Empire and France. By 1794/1795 France managed to take the territories on the left bank of the Rhine militarily. In the Treaty of Basel in 1795, Prussia declared itself ready to recognize the Rhine as the eastern border of France. Berlin accepted the loss of Reich territory to France because it was primarily interested in the annexation of Polish territories . In the secret articles of the Peace of Campo Formio in 1797, Emperor Franz II France also confirmed the right to take possession of the areas on the left bank of the Rhine. In return, the German states should be compensated with church property on the right bank of the Rhine ( secularization ). It was not until the Peace of Lunéville that the promise of compensation (Article 7) was made public. The treaty was preceded by an armistice , which was signed on December 25, 1800 in Steyr . The Peace of Lunéville ended the Second Coalition War against France and confirmed the Peace of Campo Formio. 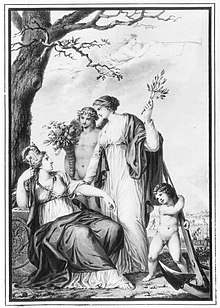 The Goddess of Peace comforts Germania - Allegory of the Peace of Lunéville, Friedrich Georg Weitsch , 1801

The Treaty of Lunéville regulated the legal integration of the areas on the left bank of the Rhine, which had been occupied since 1794, into French territory. 63,000 km 2 of land and 3.5 million people thus fell to France. The principalities of the Holy Roman Empire , however, were promised compensation through the secularization of spiritual and, in some cases, mediatization of smaller secular territories. In this way, the enlarged German medium-sized states, but also the great power of Prussia, were to be drawn to the French side. The distribution of the territories on the right bank of the Rhine was not implemented until 1803 by the Reichsdeputationshauptschluss . While Venice , Istria and the Dalmatian coast remained Austrian, Emperor Franz II had to recognize the French subsidiary republics , the Batavian (Netherlands), the Cisalpine (Milan), the Helvetic (Switzerland) and the Ligurian Republic (Genoa) in return. The Grand Duchy of Tuscany , previously ruled by the Habsburgs, was incorporated into the Kingdom of Etruria , another French vassal state. The Grand Duke Ferdinand III. received the prince-archbishopric of Salzburg and the prince-provost of Berchtesgaden as compensation . With the Peace of Lunéville, France replaced Austria's role as the strongest continental European power.

Since French laws, which were formally published in the annexed areas, were recognized under constitutional law as a result of the Peace of Lunéville , they are or were partially still in effect in areas on the left bank of the Rhine in the German states , for example the full-time so-called left bank notary , the Cemetery system or certain state services to the churches. The progressive Civil Code , which is important for the economic development of the Rhineland, also continued to apply in these areas for a long time in Prussian and for Rheinhessen in the Grand Ducal Hessian period and was not replaced until 1900 by the implementing laws of the Civil Code .

Cities were divided by the Treaty of Lunéville, especially along the Rhine . This was the case in Laufenburg, for example: The right bank of the Rhine came to the margraviate of Baden and on the opposite side Laufenburg became part of the Helvetic Republic . It was the same with Rheinfelden in Baden and Switzerland . In Basel , however, this did not happen.

Friedrich Hölderlin took the peace treaty of Lunéville as an opportunity to write the poem Peace Celebration. The full handwritten text of the anthem was not discovered until 1954 in London.