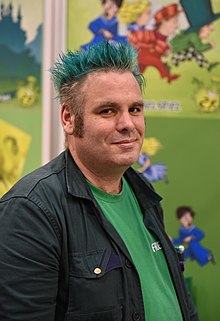 Friedemann Friese at the international match days in Essen 2017

Friedemann Friese (born June 5, 1970 in Stadthagen ) is a German game designer and operator of the game publisher "2F-Spiele". After graduating from high school , he began studying mathematics , which he did not finish, however, as he founded the games publisher “Spiele-Bau-Stelle” in 1992 to self- publish his first game Wucherer . In 1994 the publisher was renamed "2F-Spiele", based on his name. Today Friese lives in Bremen and has been a cutterpuller at Lokomotive Pusdorf since 2003 .

Since his youth he has enjoyed playing board games and since the rules often did not seem optimal to him, he "optimized" games. He later invented it completely himself. Friese has a preference for the letter F and the color green, which is why practically all of his games can be identified by these two characteristics in terms of design and aesthetics. Games of chance do not correspond to his philosophy; in his opinion, the player who has the best strategy and understood the game best should win, not the one who gets the most luck from the dice. For this reason, his games usually do without dice.

If no publisher is given, then the game was published by the own publisher "2F-Spiele".