Austerlitz came from a humble background and had to earn his own living very early on. From 1876 Austerlitz worked as a farmhand, warehouse worker and clerk. Overly ambitious, he taught himself a lot over time. In 1898 he left Judaism.

At the age of 25, Austerlitz was "discovered" by Victor Adler and engaged in his social democratic workers' newspaper , founded in Vienna in 1889 . When this was converted into a daily newspaper in 1895, Austerlitz von Adler, who was not allowed by his political functions to take care of the newspaper on a daily basis, took over the function of editor-in-chief .

As a member of the Social Democratic Workers' Party, Austerlitz was committed to various political issues, but especially to freedom of the press : he criticized the draft of a new press law introduced in the Reichsrat in 1902 by kk Prime Minister Ernest von Koerber ; on the republican press law of 1922 he exercised significant influence. He campaigned just as vigorously for universal and equal suffrage as for a more socialist economic order. At the same time, society should be reorganized.

On February 16, 1919, he was elected to the Constituent National Assembly of German Austria , and on October 17, 1920 to the National Council, of which he was re-elected in 1923, 1927 and 1930, until his death. Although not a lawyer, Austerlitz was appointed to the Constitutional Court for life in 1919, but had to leave it again as a result of the Federal Constitutional Amendment in 1929 .

When the accused of the Schattendorfer trial were acquitted on July 14, 1927 , Austerlitz wrote the leading article The murderers of Schattendorf acquitted, which was understandable in view of the unpunished killing of two people, for the edition of the Arbeiter-Zeitung that appeared on the following day . . This provided the occasion for the mass demonstration held in Vienna on the same day, which culminated in the fire of the Palace of Justice and a rampant police operation with 89 dead demonstrators and five dead police officers. 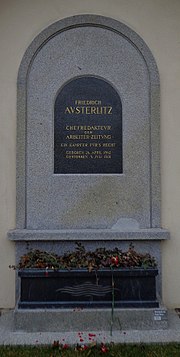 Friedrich Austerlitz died in Vienna on July 5, 1931 at the age of 69. His honorary grave is located in Vienna in the urn grove of the Simmering fire hall (Department ML, Group 20, Grave No. 1G).