from Wikipedia, the free encyclopedia
This is the sighted version , which was flagged on February 7, 2021 . There are 2 pending changes that have yet to be viewed. 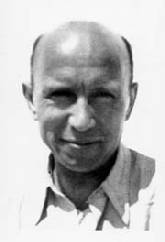 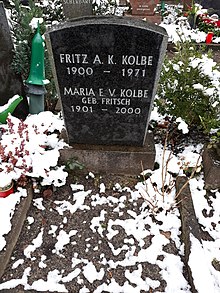 The grave of Fritz Kolbe and his wife Maria in the Evangelical Luisenkirchhof III in Berlin.

Fritz AK Kolbe (* 25. September 1900 in Berlin , † 16th February 1971 in Bern ) was a German official who as a resistance fighter in the era of National Socialism and as an unpaid agent in the Foreign Office under the alias George Wood worked and missing due to the later rehabilitation and non-reinstatement after the Second World War gained particular importance.

He was an opponent of Nazism in general and Adolf Hitler in particular, whom he described as the fatherland traitor called. He also believed that the dictatorship could only be ended by Germany's military defeat in World War II.

Kolbe was the son of a social democratic craftsman. He took part in the Wandervogel movement. In 1917 he graduated from secondary school. After completing his military service, he worked as a secretary for the Reichsbahn from January 1919. In 1920 he made up his Abitur at an evening grammar school and then studied economics and languages ​​(English, French, Spanish) at the commercial college and at the University of Berlin. Afterwards, Kolbe completed a six-month training in the foreign service.

Kolbe was a career official in the middle foreign service . In 1933 he became Consulate Secretary First Class in Madrid , then in Warsaw and Lisbon . He was later promoted to chief inspector. From 1938 to 1939 he worked as Vice Consul in Cape Town , but decided to leave South Africa after the outbreak of war because German diplomats were under increasing surveillance by the British government. He went back to Germany, where in November 1939 he accepted a position in the visa department of the Foreign Office in Berlin. At the beginning of 1941 he became an employee of the Ambassador for Special Use Karl Ritter , the liaison officer from the Foreign Office to the High Command of the Wehrmacht (OKW). This gave Kolbe access to classified political and military information.

After a collaboration with the British secret service failed, Kolbe delivered copies of numerous important documents, including 1,600 secret telegrams, to the Americans from August 19, 1943 to 1945, sometimes at risk of death. His liaison there was the OSS agent Allen Welsh Dulles , a former business lawyer, longtime diplomat and expert on Europe and the later director of the CIA - the successor organization to the OSS. Kolbe always refused to receive money for his services. Through Ferdinand Sauerbruch , whose private secretary Maria Fritsch was friends with him and who later became Kolbe's second wife, he also had contacts with the organized resistance. Kolbe's plans to actively carry out resistance actions himself were talked out of him by Dulles, who considered his services as a spy to be far more important.

For example, Kolbe passed on detailed information on the following topics:

The information provided by Kolbe did not have the effect it could have, as the American government long feared that he could be a double agent and provide false information.

Cooperation with the USA after the war

From March 1945 he stayed in Bern until July 1945, then returned to Berlin, where he continued to work for the US Office of Military Government for Germany (OMGUS) until 1949 and then tried to emigrate to the USA.

In 1950 Kolbe wanted to return to the Foreign Office. However, the head of the personnel department in the Foreign Office, Wilhelm Melchers , thwarted his appointment. The Independent Commission of Historians around Eckart Conze found notes from Melcher, according to which Kolbe “may not be hired under any circumstances” and “should remain without notice”. The continued payment of the transitional allowance, to which Kolbe was entitled as a former civil servant, was also omitted. He received a small American pension, mediated by Dulles. Kolbe eventually earned his living as a traveling salesman for chainsaws.

In February 1971 Kolbe died of biliary cancer in Bern . His grave lies next to that of his second wife, Maria Fritsch, in the Luisenfriedhof III in Berlin.

It was not until September 2004, almost 60 years after the end of the Second World War, that he was officially honored by Federal Foreign Minister Joschka Fischer (for example through the inauguration of the Fritz Kolbe Hall in the Foreign Office). In the Foreign Office he has been recognized as a resistance fighter since 2004 , and he has been listed in the German Resistance Memorial Center since 2005/2006.

In 2003 a biography of Kolbe, written by the journalist Lucas Delattre, was published in France, and in 2004 the German translation was published.

The novel Kolbe by Andreas Kollender about Fritz Kolbe's life and espionage was published in 2015 .

In 2019 the novel Die Spionin der Charité by Christian Hardinghaus was published , which looks at Kolbe's espionage activities from the perspective of his fiancée.